This is not a perfect set of images. The "lime" only treatment has an overlayer of very mature grass. However, the greener parts were also almost devoid of clover. Percent of clover in the sward is my quality metric. Less than 10% is disappointing, 25%-to-35% is grand.

It looks like there was zero response to the lime. Also worth noting was that the response of the 6-24-24 and the 6-24-24 + lime were very similar.

The last two numbers in 6-24-24 stand for phosphorous and potash (potassium). There are two pieces of evidence that suggest that potash is my limiting factor. Lime increases phosphorous availability and the total non-response to lime suggests that phosphorous is not likely to be the issue.

The other piece of evidence is that potash is historically a limiting factor for clover/alfalfa in my part of Michigan. That is not necessarily true in other parts of the country. Richard Leep, for instance, contends that phosphorous is the limiting factor in the part of Nebraska he grew up in.

So I tagged along with the ever-beautiful Mrs ERJ when she went to Charlotte to have "her hair done". While the ladies inside were working a miracle (that is, making her even MORE beautiful) I went to the elevator and bought fifty pounds of 0-0-60. Once I got home I spread it over about a third of an acre.

Aside: While looking on the internet for application rates for potash, I ran across one article that suggests that forage yield is very insensitive to potash levels. Even if the levels stayed constant in the short-term, the fact that it (might) boost clover levels is enough reason for me to try adding potash to areas that are deficient in clover. 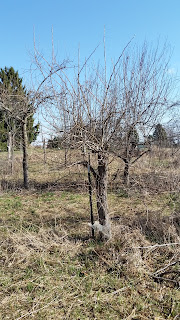 I cut a couple more pear trees out of one of the orchards. The trees I cut down were Potomac on standard rootstock. The combination was too vigorous to stay on-top-of with pruning. I will try again with Potomac grafted on quince.

Incidentally, even "dwarf" trees require pruning to keep their height at a manageable level. They might only require a significant reduction in height every five-or-ten years but they still require attention. A standard tree, on the other hand, would require annual hair cuts to keep it below ten feet of height and the water suckers would make picking the fruit a chore.

Don't be that dickhead 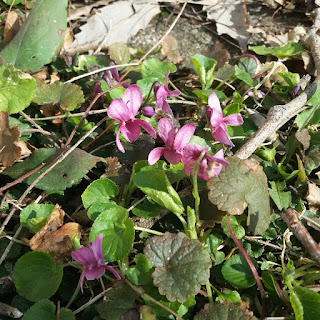 One of my nieces passed away at the age of 22. It has been about ten years. She favored the color pink.

I saw this clump of pink violets in my yard and offered them to my sister. She graciously accepted.

The reason I bring this up is because it is impossible to know what burdens people are carrying through their lives. Common courtesy evolved as a way to minimize the chances of stepping on an emotional landmine.

I always say "No", then "No" again. Rather than say it a third time, I leave the cart filled with merchandise and walk out. There are lots of places to buy what they sell.

I assume she gets some kind of bonus for the number of customers she gets signed up.

But I am unable to relate to you, my readers, how angry I get when I say "No" and it bounces off of somebody.

As a man, I had it drilled into me that "No" means "No" and nothing else. It is over. No discussion.

Apparently, this woman sees it as an invitation to argue or a chance to exercise her dominance.

And then today, I got an email from that retail chain asking why I stopped shopping there. I told them pretty much what I wrote down here. It does highlight the fact that there is no privacy when you use a credit card. They knew it was me even though I did not have their credit card.