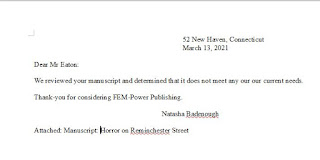 Olivia heard somebody fiddling with the heavy, front door of the dilapidated house where she was babysitting.

“Jizziamin? Is that you? Did you forget your key?” Olivia asked.

Jizziaminia Johnson was celebrating her newfound freedom. She had finally broken up with her abusive boyfriend of seven years and she had gone out drinking with a man she met a work.

Olivia tried to call 9-1-1 but the phone was unable to pick up a signal due in the low, flood-prone part of town where Jizziaminia lived.

Olivia yanked the string tied to the pillow, uncovering the glow-sticks.

The side of the man’s face was bloody. The unbattered portion revealed that the man was Jizziaminia’s estranged boyfriend.

Thumbing the ambidextrous safety of the Mossberg Maverick forward, Olivia sent the first load of Remington, managed recoil, 00 Buckshot into the intruders midrift.

Seamlessly racking the slide of the pump shotgun and maintaining stockweld with her face, Olivia continued to pump shot-after-shot into the man who was miraculously able to continue standing, perhaps due to the industrial grade drugs coursing through his bloodstream.

Olivia felt the Parkerized barrel heat up beneath the fingertips of her left hand as the solid steel construction of the Mossberg soaked up the recoil and she repeatedly rode the sight-plane back into the ten-ring for Follow-Up shots.

She saved the last round in the extended magazine and launched that into the space where his face should have been. The muzzle flash from the shotgun reducing Olivia’s vision to only being able to discern silhouettes.

Aroused by the “BOOM”s, Jizziaminia’s neighbors called 9-1-1 and were able to get through.

Viewing the damage done to the shriveled corpse who had attempted to terrorize Olivia, the police detective said, “Lemme guess. You wrested an ice-pick away from him and stabbed him 81 times?”

Olivia shook her head in the affirmative.

“Just like last time” she agreed as she nudged the bag she used to carry her hockey sticks to practice back into the corner with her foot.
Posted by Eaton Rapids Joe at 9:25 AM