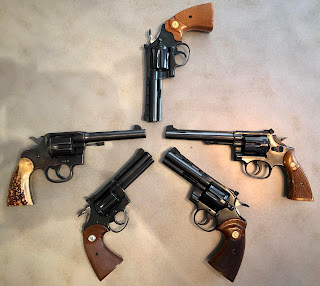 Three twenty-something ladies of my acquaintance are planning to go to Toronto.

Toronto is a beautiful city filled with amazing attractions. The last time Mrs ERJ and I went Toronto had everything one would expect in a city and almost none of the bad stuff.

That was then. This is now.

They plan to do all the touristy stuff; Restaurants, theater, street life, China town.

"No problem. You are over-reacting. We will be fine."

The last time I looked, most experts were suggesting Covid-19 had a 3% mortality rate. A 3% mortality rate is the same as putting ONE BULLET in one of these revolvers, having the first girl pick one up, spin the cylinder, press the muzzle to her temple and pull the trigger.

Then the second girl picks up a revolver and repeats. Then the third.

Then they take the guns home. They discard three empty ones so they have two revolvers with one live round.

Then each mother, in turn, must pick up a gun and spin the cylinder, put the muzzle to her temple and pull the trigger.

One-chance-in-twelve is about 8%, the mortality rates associated with a precondition like heart-disease or being 70.

They aren't just making the decision to play Russian Roulette for themselves. They are making it for their entire family.

The last time I checked, one of the young women decided to stay home. The other two are sure the old people are over-reacting.

These are real issues during our epidemic. The girls are looking at social media and seeing their friends in Mexico, San Francisco, South Padre and so on. They feel entitled to a spring break because social media informs them that this is what cool, young people do.