A glorious day to be outside

It was a beautiful day.

I frost seeded parts of the pasture. The freeze-thaw cycle works the seed into the ground. I did it early in the morning while the mud was still frozen. It makes for much easier walking.


Mr Pepper, one of my coffee drinking buddies, was buried today. The turn-out was incredible...maybe 200 people. 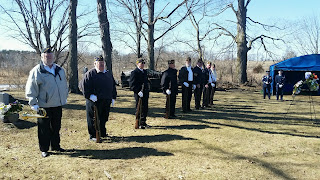 The Springport VFW showed up and rendered a 21 gun salute. Taps was played. Two officers from Wright-Patterson drove up and represented the Air Force. The clergy who officiated was the Rev. Bill Luger.

Note to self: When I am 85 and have the flu, don't climb a ladder and play on the roof. The d*mned cats can figure out their own way down.

Mr Pepper went out the way he wanted. He landed on his head, regained consciousness in the hospital. Was able to say good-bye to folks for a couple of days and then hit the silk.
Posted by Eaton Rapids Joe at 6:31 PM