While hanging lights in the grade-school, I got to thinking about the possibility of having Mass (what Catholics call their main, religious service) outside.

Our Bishop cancelled all public Masses for a few weeks while events sorted themselves out. For Catholics, that is a very, very big deal. We get great spiritual strength from attending Mass and it is deeply ingrained within us.

Specific Covid-19 transmission risks
I could only think of three pathways for Covid-19 transmission.
Since it is not possible to quantify exactly how much risk is from each path, it is prudent to consider them equal and then to estimate the degree of risk mitigation as the path that was least improved. 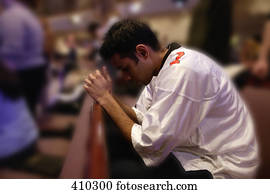 It is an item of forensics faith that Object A cannot touch Object B without the surface of A being contaminated by material from the surface of B and vice versa.

Transmission by touching could result from people shaking hands. It could be from touching the top of the pew in front of you that had been contaminated by an earlier service.

If hand-shaking was prohibited and if the worshipers brought their own Bible (BYOB!) and their own folding chairs (soccer chairs) or stood during the service then the only risk is from the Communion distribution and from touching the outside door handle of your vehicle.

If Communion is shared, the Host (what we call the wafer) can be placed in disposable, single-use cups by a masked, gloved person and they can be consecrated in that condition. I submit that would reduce the transmission-by-touch to almost zero as the Priest handed out the single-use cups.

Under these conditions, holding the religious service outside reduces the risk of transmission by touch by 99.9%

The average wind-speed in Lansing, Michigan in Marce is approximately 12 miles an hour. It is somewhat lower in the morning and lower yet in suburban areas, four feet from the ground. Therefore, I will use an average wind-speed of 4mph as a defensible estimate.

The suspended aerosol from a sneeze in the center of a 100 foot congregation would clear the outer edge of the congregation in 8.5 seconds.

In an enclosed room with an air-turnover every four minutes, only 2.5% of the aerosol would have been cleared.

One of the quirks of HVAC is that the incoming stream mixes with the room in the air. Think of putting a full gallon of milk beneath the faucet in your kitchen sink. There is still milk in the jug even after you have run a gallon of water into the jug.

Arbitrarily using 1% as a threshold for zero, it takes about 28 minutes for the air to "clear" even when the air is changed over every four minutes.

Dividing 28 minutes by 8.5 seconds (0.005) suggest that holding a religious service outside reduces the risk due to suspended aerosol by 99.5% (one part in two-hundred). 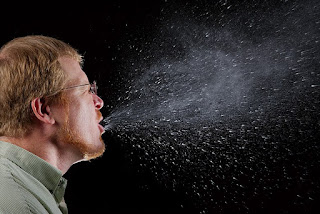 Transmission by direct impingement of dominated by the behavior of the person sneezing and the spacing of the people.

Changing the behaviors of the people sneezing is outside the scope of this essay.

For the sake of simplicity, let's assume the ejectia flies forward. Consequently, the person sitting to either side of the sneezer is at less risk than the people sitting in a cone shaped region ahead of the sneezer.

In a typical church, approximately 15 square feet allocated for every person at max capacity. Much of that is used for aisles, a bit for the altar. If you just look at the pews, they might be on a 54" pitch and at a packed service you will have a body every 24" of pew length which works out to one person for every 9 square feet.

In my hypothetical, outside worship space I envision lines painted on the ground similar to lines on athletic playing fields. Those lines would be spaced at some recommended interval to minimize ejectia transmission. Congregants would stand or place their soccer chairs on the lines.

Suppose the lines were placed ten feet apart, the number of people within the forward cone of ejectia would be diminished...first because of the greater pitch between "pews" but also because most people space soccer chairs about 24 inches apart so they can egress between them.

Using 10' by 4' spacing there is one person every 40 square feet which reduces the risk of transmission by direct impingement by approximately 75%.

This comes with a caveat: All of the larger ejectia eventually falls out due to gravity while the smaller droplets are "suspended" and were discussed in the section immediately above this one. At some distance, all of the larger ejectia will have fallen on the ground and the risk is not reduced by 75% but by 100%. I don't have the expertise to say whether that is ten feet or twenty feet or forty feet.

All comments will be appreciated, especially if the writer has some insight into how far the larger sneeze droplets will travel.

Bottom-Line: At this point, holding religious services outside would reduce risk of Covid-19 transmission by a minimum of 75% when compared to the risk of indoor services.
Posted by Eaton Rapids Joe at 10:15 PM