Death-rates due to alcohol, drugs and suicide in the United States 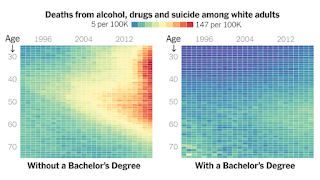 I saw this graphic over at Defense and Freedom blog. It was originally from the New York Times.

Looking at the horizontal axis, it looked like it stopped about 2015. I wondered what more recent data looked like. Secondarily, I was curious to see if I could replicate the numbers.

These are mortality rates for white adults aggregated into bins of five years. They are not separated out by college/non-college graduate.

A close reading of the text reveals that the authors looked at non-Hispanic whites. I wonder if that would make any difference.

I was curious about the break-out between suicide and death by alcohol and drugs.

Clearly, death due to alcohol and drugs dominates the category and has increased since 2012.

If you look at the non-bachelors data long enough you start to see a couple of things. One is that it looks bi-modal. One peak is in the early 30s and the other centers around fifty. You will also notice a diagonal streak as the cohort born around 1953 ages.