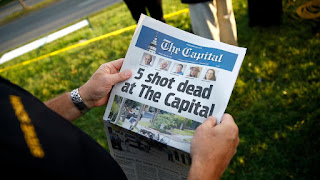 Old NFO wrote, "Did you notice how quickly the latest shooting fell off the media radar..."

My take is different than Old NFO's.

The Maryland Capital-Gazette newsroom shooting fell off the media radar because media knows that continued coverage of that story makes them a target.

Simply presenting an "idea" often releases a torrent of ideas that were locked up by the "failure of imagination" that made the original idea "unthinkable".  What really changed between September 10, 2001 and September 12, 2001?  The unthinkable became a reality.

Mainstream media is funded almost entirely by advertising revenues.  They believe in the power of repeated presentation of ideas.

Playing the odds
Media cold-bloodedly covered school shootings because many people in media don't have kids.  Or they figure there are 100,000 schools in the United States and figure the odds are that the next shooter won't choose the school their kids go to.

They don't mind putting other people's kids at risk because it sells advertising slots.

But there are currently 1300 daily newspapers.    The odds of being the next target increases by a factor of 100 compared to school shootings when shooting up newspaper offices becomes imaginable.

Looking at national news there are only three:  CNN, Fox and MSNBC.  The odds of being the next target increases by a factor of 30,000 compared to school shootings.  That is probably why you never hear of unhinged people attempting to penetrate those businesses.  I am sure it happens but you simply don't hear about it.