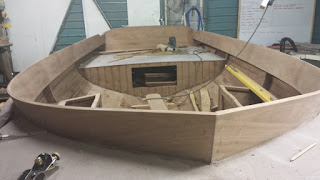 I got a call from a friend this morning.  We last worked together in 1994.

He is overthinking the railing on his deck.

He and his wife bought a house with a fantastic view of one of Michigan's Great Lakes.  My friend is a sailor and he envisions the railing to be analogous to the coaming on a big-water, racing sail boat.  The picture shown above approximates his vision, except he would add gimbaled cup holders every two feet for the daily ration of grog. 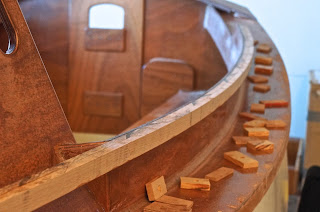 My friend is leaning toward two-ply, glue-lam, straight grained white oak finished with teak oil.  He is also entertaining ripple-grained African Mahogany and, if the stockmarket continues to dump, Douglas Fir.

His wife, on the other hand, wants to see the view they paid big money for.


She envisions herself sitting in an Adirondack chair, displaying her gorgeous legs while sipping a flute of Pinot Grigio and regaling her guests with awesome stories, all while watching the sun set over Lake Superior.  She wants the rail to be as invisible as a spider web.  They paid a lot of money for that view.

Recognizing that the Adirondack chair was part of the problem, he suggested a taller chair so she could look out, over the rail.  No go.  Then he suggested a bi-level deck with the portion closest to the house 8" higher than the rest.  Again, no go.

One suggestion I had for him was to offer a substitute vision of equal vividness.  "What about the brass pole from a fire-station?" I asked.  That gives her a conversation piece that is different from every other nice house up-and-down the shoreline.

And my friend can tell his friends it came from the Exotic Dance "studio" where he first met his wife.