How the bear sh!ts in the woods

One afternoon Mr Rabbit was enjoying a calm, contemplative sh!t in the woods when he noticed a large bear engaged in the same activity.

The bear, noticing Mr Rabbit, asked him in a quizzical, conversational way, "Are rabbits troubled by fecal matter sticking to their fur?"

Delighted to have a chance to explain how rabbits are superior to bears Mr Rabbit replied, "No.  Rabbit feces are small and round, dry and hard.  Rabbits are not the least bit troubled by feces sticking to our fur."

"Good!" replied the bear as he scooped up Mr Rabbit and used him to scrub his nether regions.

The one question that kept coming up regarding my long (+14 mile) walks involved "What did you do about solid waste elimination?"

After hearing that question for the third time I realized it is a topic that I needed to write about.  Sadly, today's youth have had little need to study this topic.

Background
You might find yourself needing this information if you are on a long walk. 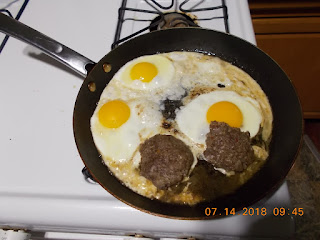 Or perhaps you were invited to "hunting camp" and ate a breakfast that was far larger and greasier than is your norm.  You find yourself under pressure as you near your stand when you realize the host locked the cabin.

Or perhaps you plan to move to San Francisco and want to experience a carefree, bohemian lifestyle.

Personally, I favor corn fields as they are very unlikely to have human traffic either during or after the main event.  They are large enough that any run-off during torrential rains is likely to be absorbed or very diluted.  Corn is tall enough to screen and widely enough spaced to not get in the way.

It is absolutely critical that you consider the ease with which you can cover the evidence.  Covering the output reduces the possibility of flies spreading pathogens.  Covering also moderates long-term temperature and moisture fluctuations allowing biological agents to 'mellow' your contribution to the soil.  Corn fields have bare dirt that is easy to scrape with a shoe or boot.

Another consideration is the proximity of yellow jacket or wasp nests.  Fire ants would be a factor in the deep south.  Yeah, I know your tender regions are pulsating but take a count of thirty and really scope out the immediate area (20 foot radius).

The Stance
Like all performance oriented sports that involve sending small objects flying through the air, stance is critical. 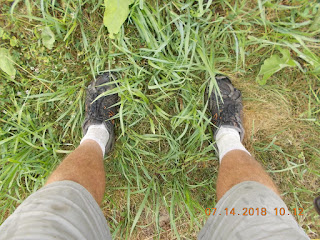 The ideal stance is with the feet fairly close together and the feet oriented in a slightly pigeon-toed manner.

The temptation is to have one's feet widely spaced.  The problem with that is that it does not give the bear the opportunity to push clothing forward and out of potential spray region.

Closer spacing of the feet allows for a more favorable arrangement of clothing.  This is critically important in the winter time.  The closely positioned feet also prevents clothing from migrating back downrange.

Closing the range
Hunters realize that the key to hitting the target is to close the range to the practical minimum.  Squatting will both close the range and minimize the risk of collateral damages but will also allow your sphincter valve to relax and let nature take care of the rest.  Hence the slang term, "pop-a-squat".

Remember:
Fiber is not always your friend and to always carry paper towels with you.


---Added later---
I don't want readers to think that I walk out the door with the intention of taking a dump on property that does not belong to me.  That would be disrespectful.

However, our guts are run by a semi-autonomous central nervous system, something like a two year-old toddler.  It does what it wants to do.  Sometimes it just does not matter that you avoided fiber and coffee and did not eat any food...you just gotta go.
Posted by Eaton Rapids Joe at 10:45 AM