I made it, averaging a snail-like 2.5 miles per hour.

I had shin-splint the last few hours and that slowed me down.  I must have modified my stride to take some of the load off the blisters and that overloaded my shins.  That is, I think I went to more of a heel-strike and less of a mid-foot strike.

The trip was 25.5 miles and I was dragging by the end.

Time
One thing you can say about walking is that it takes time. 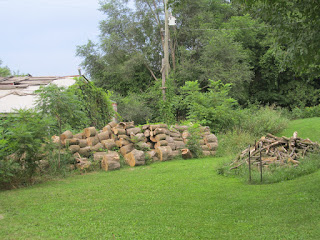 I was taking a picture of a garden when an old (older than me, anyway) man and his dog came boiling out of his house.  "You. Hey, you.  Stop right there for a second." he said.

I thought he was angry.  Nope.  Just starved for company.

We chit-chatted for a bit and then he walked a mile with me.

His name is Henry.  His dog's name is Pugsley.  He considers himself a subsistence farmer!

The only thing that twists him around the axle is figuring out where the money for paying property taxes is going to come from.  As a younger man he cut firewood and once timbered off the swamp.  Lately, most of the cash for taxes comes from leasing out the hunting rights for his property.  The rest of it comes from a few steers he raises with hay from his property.  A neighbor cuts the hay on shares.

He has friends who give him rides into town.  Just this past weekend a neighbor picked him up and the listened to free music in Hillsdale.  Sometimes he gets a ride back.  Sometimes he walks.

I asked him for advice in case I ever want to change my career to 'subsistence farming'.  He said, "Don't ever spend any money." 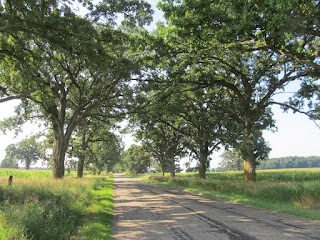 I think I walked through some of the prettiest country yesterday that I have ever walked through.  The five miles of 29 Mile Road from Albion to M-60 is picture-postcard pretty.  Lots of majestic trees and I bet the colors are stunning in the fall since 30% are sugar maples. 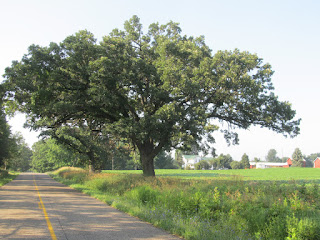 Most of the other trees are oak trees of various species.  They also have cozy farm houses and rock walls between the fields and the road.

I am sure those trees cost the farmers yield out into the field.  The trees outcompete the crops for moisture and sun.

Someday, those landowners will feel compelled to cut down those trees and the world will be a poorer place for it.  In a perfect world, the pro-environment people would figure out a way to compensate farmers/landowners for those diminished yields to relieve the economic pressure on the folks who have been protecting those trees.

Perhaps they could kick in money like church-goers sometimes sponsor "pagan babies" in Africa.  I could even see sending them photos of "their" tree and giving them a certificate entitling them to the oxygen it produced.