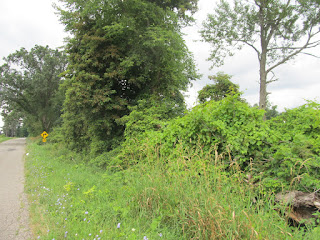 As I was walking yesterday I came upon a scene that made no sense at all.

I saw a pristine specimen of Riverbank Grape (Vitis riparia) next to a tree that had been monkey-hammered by Japanese Beetles (Popillia japonica).

The reason that this makes no sense at all is because Vitis riparia is to Japanese Beetles what Bacon Double Cheeseburgers are to teenagers:  Prime eating. 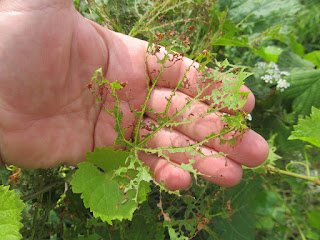 As discussed in earlier posts, I am reconstituting my vineyard.  Mid-summer came and so did the Japanese Beetles.  And then I remembered one of the reasons I had soured on grapes...the need to spray for JBs.

This might not be a big deal to some grape growers.  They may have chosen hybrids with large amounts of Vitis labruscana in their ancestors.  Perhaps they do not have many acres of grassland (pasture) downwind of their vineyard.  Maybe their vineyard is so large that the JBs only impact the edges. But that would not describe my operation. 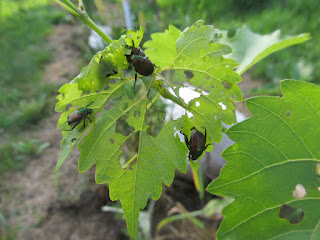 I dislike spraying insecticides.  So I am very attentive when any alternative makes itself known. 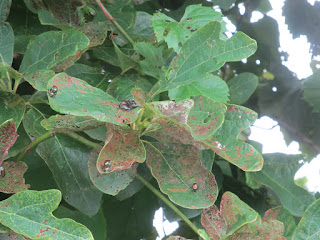 I kept a weather eye out for other Sassafras on my walk.  Not all of them were magnets for Japanese Beetles but many of them were.

While there might be a genetic component, there was one thicket that I believe to be a single clone on 29 Mile Road in Calhoun county, Michigan, 3.7 miles north of I-94 where some were hammered and some were not.  That suggests that there are other factors that are at least as important as genetics.

My first hypothesis is that the targeted Sassafras received direct, early morning sun and are at least 6 feet taller than the non-targeted specimens.  This makes a huge amount of sense when one considers that Japanese Beetles release pheromones to attract mates.  The pheromones are aromatic.  Early morning sun would warm the beetles and stimulate the release of pheromones and increase the volatility of the pheromone.

The pheromones create a positive feedback loop.  More beetles means more pheromones released which, in turn, attracts more beetles.  One way to manage a decoy crop is to "tip" the pressure into one part of the planting with pheromone lures one year and then into another part of the planting the next.  Alternating the early-season tip allows the section that received the most pressure the prior year to recover the next.

Sassafras can grow to be a fifty-foot tree but is very easily managed as a 10-to-15 foot tall scrubby-tree.

So, after the leaves fall, I will be prowling the back-roads looking for Sassafras suckers to excavate and transplant to protect my vineyard.

Other decoy crops, Basswood
Another tree that is frequently listed as "most vulnerable" to Japanese Beetles is Linden (aka, Basswood, Linden or Tilia).  There are many species, several of which are much more cold-hardy than Sassafras.

Cold-hardiness is an important consideration in states like Minnesota and Montana where Vitis riparia is in the ancestry of most grape varieties since V. riparia imparts cold-hardiness, high sugar, pest resistant roots and early ripening.
There is a location that is close to my house where Sassafras and Amercian Basswood grow right next to each other.  There was twice as much Japanese Beetle damage on the Sassafras as there was on the Basswood but the Sassafras was higher, had better sun exposure and was downwind of the Basswood so I refuse to draw a conclusion.

Virginia Creeper
Virginia Creeper (Parthenocissus quinquefolia) is a native vine that is preferred by Japanese Beetles.  It is at least as desirable as V. riparia.  As a vine, it can be trained to any height that is desired, including to six feet (two meters) above the crop being protected.

Why not just sacrifice some grape vines?  Because there may be some genetic encoding going on in the Japanese Beetles over multiple generations.  Wouldn't it be nice to be selecting for JBs that prefer Virginia Creeper to grape vines?  Even better would be to breed JBs that selectively demolished Poison Ivy, but that is a blog post for another day.

Smartweed is an annual weed that is high on the preference list of Japanese Beetles.
It is difficult to supply a "typical" picture since there are over 200 recognized species of this weed.

Unlike the trees, smartweed is only two feet tall, give-or-take.  The advantage of annuals is that you can encourage them for a while and see if they work for you.

While this may be true for some pests, I think it is not true for Japanese Beetles.  They are SO strongly attracted to the prime concentration that they virtually ignore all of the competing "me-too" sites.

For the sake of completeness, the opposite of this set of circumstances would be if the pest that was being attracted was documented as spreading virus or other nasty diseases...such as Dagger Nematodes.  In that case the grower would make every effort to be invisible.

A note on height
While doing our field survey, Mrs ERJ and I noted JB damage as high at 30 feet (10 meters).  However, that damage was incidental or rare compared to the damage lower in the canopy.

It takes energy and time to gain elevation.  Japanese Beetle adults emerge from the ground and must expend energy to fly upward. 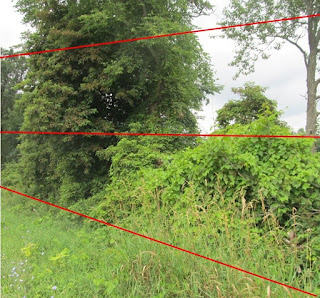 The optimum height for decoy crops is probably one typical "dimension" higher than the crop being protected.  That is, if the grapes are on a 6' trellis then any height above 12' is probably unnecessary and intercepts sunlight that would be better used by grape vines to ripen fruit.

12' (4 meters) is high enough to ensure that the decoy crop's canopy is first warmed by the morning sun and that it functions as the primary beacon calling JBs.  Of course, the grower can facility the beacon effect by hanging a pheromone trap in the decoy crop early in the JB season.