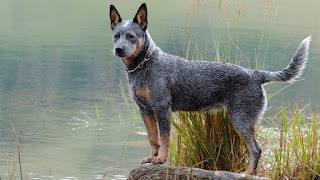 Just as the SEALs chose the Belgium Malinois, the medic units of the Marines looked around and determined that the Australian Cattle Dog most closely met their needs.

In classified documents that were leaked to Al Jazeera by Imran Awan and then purchased by ERJ News, it was revealed that one Australian Cattle Dog saved approximately 694 Marines in a battle in Falluja, Iran.  Video evidence shows the single dog dashing from one wounded Marine to the next.

The dog applied compresses, set bones, ran blood transfusions and performed minor brain surgery in the three hours of video. It is estimated that the dog donated 43 units of its own blood (O-) to save fellow Marines.  In most cases, simply touching the Marine was enough to cause wounds to close, bones to knit and for the formerly wounded Marine to arise and again take the battle to the enemy.

Expressing amazement, the Chief Commandant for the U.S. Marines asked how it was possible for one dog to bring so much aid and comfort to HIS Marines.  The dog's handler answered with a laconic drawl reminiscent of John Wayne, "Well, it is a Blue Healer."