Amusement is where you find it

We are in the middle of the air-conditioning season.

I had written off the large swings in the temperature of our bedroom to having a wife whose metabolism is so economical that she can subsist on dermal photosynthesis and a son whose basal metabolism clocks at about 4500 Calories a day.  They both regularly adjust the thermostat.

How-some-ever, I think I found a third and maybe a fourth culprit. 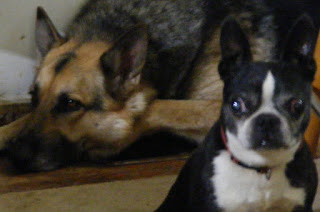 Do you see that look of bliss on Herc's face?  Hercules is the German Shepherd in the background.  If you look closely you will see a horizontal line beneath his front leg.  Does anybody want to guess what that horizontal line belongs to?

Oh, and we have two German Shepherds.  That is enough to seriously throw off the air flow balance from the registers.

No wonder the bedroom feels like it is 62 degrees some nights.

Maybe I am weird, but I think that is amusing.
Posted by Eaton Rapids Joe at 11:46 PM