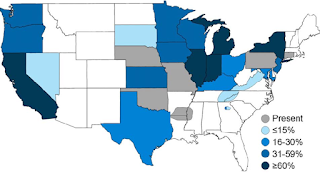 Raccoon Roundworms (Baylisascaris procyonis) may be the perfect biological weapon.

The common raccoon is the primary host for this parasite.  Not only have urban areas been a windfall for raccoon populations, but the closer proximity facilitates the raccoon-to-raccoon transmission of this worm.

All quotes from October 2005 issue of Clinical Microbiology Reviews


In the raccoon intestine, adult female worms produce prodigious numbers of eggs, with estimates of between 115,000 and 179,000 eggs/worm/day.  In nature, infected raccoons shed an average of 20,000 to 26,000 eggs per gram of feces and can shed in excess of 250,000 eggs per gram of feces. Thus, infected raccoons can shed millions of B. procyonis eggs daily, leading to widespread and heavy environmental contamination.

...the broad host range of B. procyonis larvae is most unusual and likely represents a distinct survival advantage for the parasite (29). Specifically, the ability of larvae to infect over 100 species of animals and birds

A small but potentially devastating number of larvae (typically 5 to 7%) then enter the CNS. Aggressive migration and growth of larvae, particularly within the CNS, leads to the debilitation or death of the intermediate host by acute fulminant eosinophilic meningoencephalitis

"Small" is a relative term.


In one of the first fatal cases, 185 live motile larvae were recovered postmortem from one 60-g sample of cerebrum 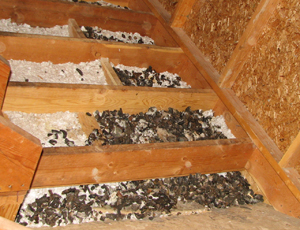 Although generally solitary animals, raccoons defecate in preferred communal sites, termed latrines.  In forested and rural areas, raccoon latrines are characteristically found on raised flat surfaces, such as stumps and limbs of trees, large logs, downed timber and rocks, and at the bases or in the crotches of trees (and in tree stands).  In suburban and urban settings, raccoon latrines are also found in lofts, attics and chimneys, and on flat roofs, wooden decks, woodpiles, and patios

Baylisascaris procyonis is also increasingly recognized as a cause of ocular disease in humans. In contrast to NLM, which is almost exclusively restricted to infants and young children, isolated ocular larva migrans (OLM) usually occurs in otherwise healthy adults

The prognosis for B. procyonis NLM is grave with or without treatment; among documented cases, there are no neurologically intact survivors.

Anthelmintics successfully eradicate adult B. procyonis worms from the intestines of raccoons and skunks but are much less effective against larvae in tissues of intermediate hosts and humans. In one of the first-documented human cases, thiabendazole treatment failed to prevent the isolation of numerous live motile larvae from the child's brain postmortem

...the longevity of B. procyonis eggs and their resistance to disinfection or decontamination makes successful environmental cleanup difficult. Detailed guidelines are available for raccoon latrine cleanup. Heat is by far the best method of killing B. procyonis eggs. Boiling water, steam-cleaning, flaming, or fire are highly effective and practical methods for decontamination of large or small areas. The use of direct flames from a propane flame-gun is a favored method. (a bit tough in an attic) For heavily contaminated areas a combination of removal and disposal of the top few inches of surface soil with flaming is most effective. Ideally, personnel cleaning contaminated areas should wear disposable overalls, gloves, and mask and eye protection. All potentially contaminated material removed from these sites, including used protective clothing, should be incinerated. Contaminated surfaces can be adequately cleaned with a xylene-ethanol mixture, after solid waste has been removed. However, chemical disinfection, in general, is rarely effective and not practical for large outdoor areas. Eggs are resistant to most common disinfectants; 20% bleach (1% sodium hypochlorite) will wash away sticky eggs but does not kill them


And you thought lead was bad for the brain!  I wonder how many inner-city kids with behavioral issues would test positive for B. procyonis.