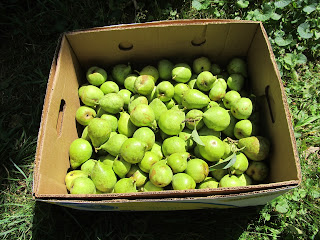 Few commercial growers around here want to mess around with pears.

These were ready to pick five days ago.

Now half of them are on the ground.

I have a use for these particular pears.

Kieffer pears
Kieffer is a variety of pear that is much maligned by fruit snobs.  The fruit is coarse, hard and lacks intensity of flavor.

Fruit growers, on the other hand, adore Kieffer.  It produces tons of fruit every year without fail.  It is also extremely forgiving about picking window.  Because it is hard, it can fall forty feet, smack limbs on the way down, bounce off a granite boulder (cracking the boulder in the process) and still be salable.  Kieffer is the pear tree you want when you wae stranded on Gilligan's Island.

My use for these fruit is to replicate the original Kieffer cross.  The original cross was Bartlett, also known as Williams' Bon Chrétien, and an un-named Asian pear.  By a serendipitous sequence of events, the tree that produced these pears is next to an Asian pear named Korean Giant, also known as Dan Bae or Olimpic.  In case you have not picked up on the fact, the more synonyms a fruit has the better the tree.

Korean Giant is Mrs ERJ's second most favorite Asian Pear.  It also blooms at the same time as the tree that produced these pears.  Korean Giant ripens about October first in my climate.  One other awesome characteristic of Korean Giant is that the pears hang on the tree even after they are ripe!  They patiently wait until I have the time to pick them.

The other slight deviation is that I am not using Bartlett as the female parent.  Bartlett is a GREAT pear but it lacks resistance to fire blight.  This pear is a variety called Potomac which is a D'Anjou cross.  It is my hope that I will succeed in pyramiding or stacking different genetic sources of fire blight resistance, thus producing durable resistance.

I hope to harvest five hundred seeds, give-or-take.  I will line them out and ruthlessly cull anything that shows leaf scab.  I should be able to identify hybrids based on leaf size and orange-red color tones.  The hybrids will be fruited out.  The seedlings that are pure Pyrus communis will be used for rootstocks.

I want to produce a pear that is as grower friendly as Kieffer but has five times the quality.
Posted by Eaton Rapids Joe at 7:23 PM