I visited Larry Sibley of Calhoun County the other day.  He used to have about sixty hazelnut, also known as filbert, bushes.  The Eastern Filbert blight came through and it wiped out all of his bushes except for six of them.  Unfortunately he has five of one variety, Grand Traverse in one planting and he has one seedling bush that is a quarter mile cross-wind from the planting of Grand Traverse. 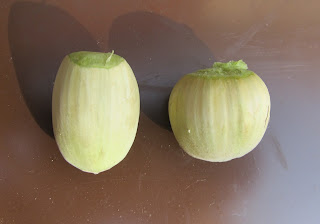 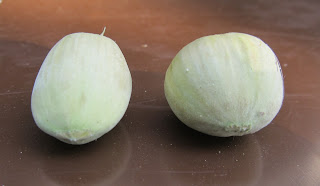 The amazing thing is that some years he has good pollination.  This was not one of those years.  The trees looked fine but the nuts were few and far between.

Hoping to help out my friend Larry, I sent an email to Dr Thomas Molnar.  Dr Molnar is a filbert breeder at Rutgers University in New Jersey.  I asked him if he had any recommendations for pollinators for Grand Traverse.

Dr Molnar answered my questions  and sent me a copy of a paper on filbert pollination.  While looking at the paper I noticed that the authors of the paper are masters of compressing large amounts of information into compact, easy-to-read charts.  I want to share what I saw and try to explain why these charts are so cool. 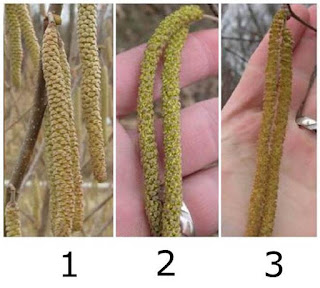 These are pictures of the catkins.  Catkins are the pollen producing organs.  Stage 2 is the prime, pollen shedding stage with 1 being early and 3 being spent.  In real life the color differences between the stages are more pronounced than shown in the photos.  I suspect these pictures were taken  on a cloudy day.

These are pictures of the pistils.  Pistils are the female reproductive organs...sex pistils if you enjoy a little bit of botanical humor.  Stage 3 is the most receptive stage.  The feathery, red pistils turn brown when they are old and no longer fertile. 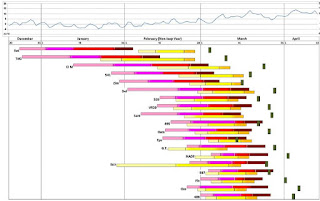 This chart contains a massive amount of information but is much easier to read than it looks.

The red box brackets peak Grand Traverse receptivity from a little bit before peak until a little bit after peak.  Pollen producers that are in synch With Grand Traverse are the ones with significant amounts of yellow within the red box.  That would be Del, 587 and 408.

To summarize what is cool about this chart is the amount of information that is embedded within it and the author's use of color schemes that intuitively link the information captured in the chart to the biological realities of the filbert plant:  Pollen is yellow and pistils are red.