ERJ calls in the Cavalry 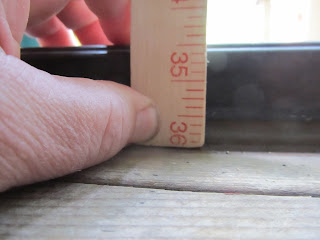 My parent's house was built in the early 1920s and was not designed for elderly people.  When dropping off their meals last Friday my father mentioned, for the second time, the difficulties imposed by high thresholds.  The one that causes the most problems is between the ramp and the back porch.

There are times when my parents use wheeled conveyances to help with mobility.  My mother, in particular, is fond of a walker that has wheels that are about 8" in diameter.

My father described a very simple, wedge shaped molding.  The picture in his head, as near as I can discern, was to have a wedge that ramped up to the 1-1/2 step created by the threshold.

Mrs ERJ and I stopped by Home Depot on the way home and were not able to find any moldings similar to what my dad described.  We found many wedge shaped moldings but none that were 1.5" wide. 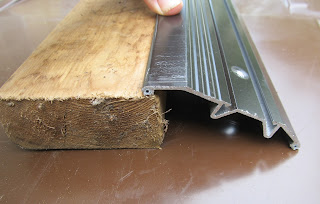 We did find an extruded, aluminum molding that I was pretty sure I could shingle over the existing threshold to smooth the transition. 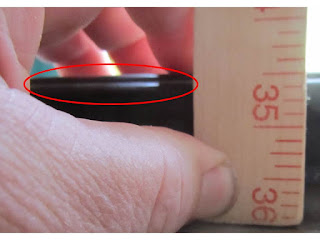 The good news is that there was a step in the existing threshold and the top of the aluminum molding nested in it and the top surface was flush with the surface of the hard rubber threshold molding.

The bad news was that my parent's needs were not satisfied. 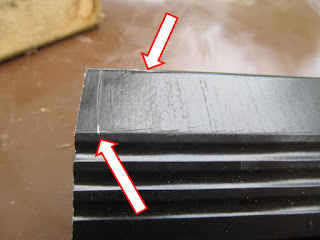 For one thing, the bottom of the door dragged on the molding.  Maybe not a big deal for you or me but not something my dad wanted to, or should have to deal with.  You can see from the rub mark depicted by the top arrow that the molding was hooking the door in the shut position.  I can just see my dad beating on the door in the winter time while standing on the icy, wooden ramp. 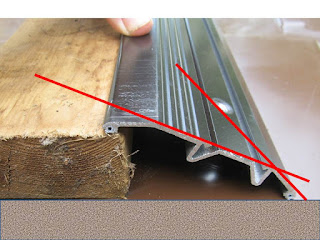 I think my dad might also have been wanting a gentler angle than was afforded by the aluminum molding.

He responded "80% women." without hesitation.

I asked him what he attributed the imbalance to.  He responded, "Men find it harder to ask for help.  Maybe it is because we are wired that way and we are socializing to be independent.  Going to church and praying is an admission that there are things that are beyond our control.  Women, in general, seem to be more aware of that than men and more at peace with asking for help."

I could see that I would really struggle to meet the needs of my mom and dad.  I lack the tools to do the job well.  I lack the skills and I rarely work on jobs that require that level of attention to detail.  I decided to ask for help.

I called my younger brother.  He gladly took on the task.  He said, "Joe, don't sweat it.  I got this.  I have a planer and I can custom make the ramp the way dad wants it."

But it is not just the tools.  He likes doing that kind of thing.  He is also the kind of guy who automatically cuts moldings with 0.7 degrees of back angle so the don't even show a hairline when he matches them up.  And he will probably use some kind of wood that will last until doomsday and look good to boot.

Posted by Eaton Rapids Joe at 9:16 AM