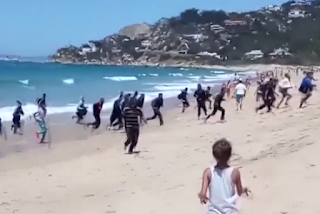 This started out as satire and then my sense of responsibility kicked in.  I deleted this installment of Fake News Friday. 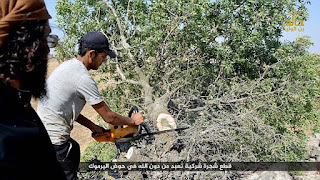 The inspiration for this post was that The Daily Mail ran an article about Khalid bin Walid Army (an ISIS splinter group) chainsawed down an innocent acacia tree because some people attributed "luck" to the tree, much as some people pitch pennies into fountains or wish upon shooting stars.

The Khalid bin Walid Army theologians decided that people were coming too close to "praying" to the tree.  Polytheism (acknowledging gods other than Allah) is forbidden by the Koran.  Consequently they took a chainsaw to the tree.  Problem solved.

This "humor" piece was going to imply that many recent migrants to Sweden, Germany, Belgium and France considered Soros, Merkle et al to be other names of Allah.  I was going to say that praying to the Allah of the mullahs and imams resulted in uncles and brothers being blown up at weddings and shot while working in fields.  The "Allahs of Europe" gave immigrants food and shelter and deliver the "infidels" to their service.

After earnest consideration I decided that post was too irresponsible to put on a public blog.

Then, after even more reflection, I decided that the Merkles and Sorros and Löfvens of the world might want to give serious consideration to the "optics" of their actions.  After all, we are talking about people who cut down a TREE, a non-sentient tree, because it might lead pious Muslims into error.

How much "sloppy" posting on social media would it take to convince The Khalid bin Walid Army (or clones there-of) that recent immigrants do, in fact, consider European princes and tycoons to be Gods?  Let's be honest.  Most of us are not professional writers.  We often transmit messages that we do not intend.

And to consider what would The Khalid bin Walid Army's response be.
Posted by Eaton Rapids Joe at 4:00 AM