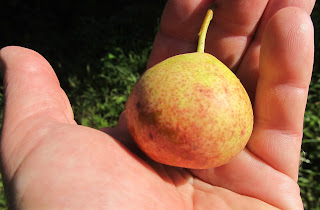 Mustafabey is an unusual pear.  It is highly regarded in the near mid-East and the Balkan regions.  It has several other names as each region claims it for their own.  From the USDA Accession Area Query tool:

Resilience
Orchards are generally insect pollinated.  Honeybee populations survive in the upper mid-West by mouth-to-mouth resuscitation, that is, the constant replenishment of hives by bees from outside sources.  Hive losses of 40%-to-70% annually are not uncommon.

Native pollinators can take up the slack but they cannot be concentrated the way honeybees can.

One strategy that makes native pollinators more effective is to move pollen sources closer to the target pollen receivers.  You cannot move them any closer than by grafting a branch of pollen source into each tree.

Then, instead of relying on the statistical improbability that a native bee will tickle a pollen source in the canopy of one tree and then fly across one or two barren, grassy lanes to spread pollen on the target, you are exploiting the bee's tendency to simply jet over to the next, closest flower.  The pollinator never needs to leave the canopy.

The actual Julian dates were left off because that will vary depending on your location.  The key point is that Mustafabey's bloom (depicted by the photo of the pear) is near or slightly after peak bloom for most cultivars.

Posted by Eaton Rapids Joe at 9:51 AM