The Utility of Unpredictability

It is universally accepted that it is advantageous to have a "Poker face" when playing poker or other games of chance that involve other actors.

My friend Nik, over at Nik's Poker Palace informs me that it is more than facial expressions, it is styles of play.  He plays a quite a bit of on-line poker and he can discern who he is playing by the consistency of their betting habits and the resulting outcomes.

Unpredictability, qualitatively, has the potential to greatly increase the profitability of one's poker career...provided that it is well timed and is quantitatively appropriate. 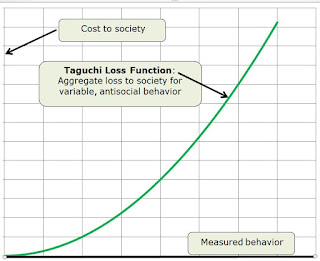 There are many behaviors where the cost-to-society is parabolic.  Examples include attendance, percent of population vaccinated, the number of walleye a poacher takes out of season and so forth.  Society is robust enough to overcome small transgressions but the costs increase in an non-linear model.  This is sometimes called the Taguchi Loss Function.

Often times people are paid to manage the behavior of other people.  We call them bosses or cops or politicians. One of their primary tools is to impose penalties on the people perpetrating anti-social behaviors. 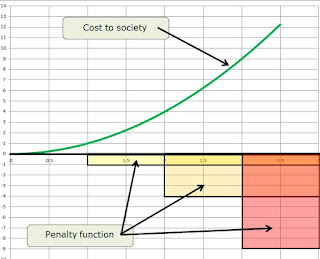 From a Game Theory perspective, the perpetrator has no interest in "Cost to Society" and in fact probably has no way to access those costs if he did care.  Rather, he is only concerned about his personal gains and the potential benefits.

The sawtoothed green line is the perpetrators NET benefit for a given anti-social behavior.  That is, the gross benefit .MINUS. the penalty function.

All local maxima will be on the verge of triggering the next step in the penalty function.  The net effect from the societal standpoint is that the Taguchi Loss Function degrades from a smooth parabola to a chunky curve.

The stepped penalty function results in increased loss to society as the perpetrator maximizes his gain.  An example would be of an employee coming into work for six minutes on Monday morning to avoid triggering the termination that would result if they missed a full week.  It may be that the employee only needed Tuesday off but they figured they may as well get the maximum "benefit" to amortize the penalty.  Obviously the firm must find replacement resources to cover the truant employee for the entire week as opposed to Tuesday.

A solution
A surprisingly small amount of randomness results in making the sawtoothed, green, Internalized Net-Benefits line "fuzzy".  Nearly all perpetrators will retrace their internal Net Benefit line to track the presumed lower boundary of that fuzzy region.  That lower bound is depicted in the illustration with the solid red line.

At the risk of hyper-focusing on "small amount":  Increased data allows the perpetrator to narrow the confidence bands as their internal map firms up.  The narrowing confidence bands act like shrink-wrap and the internalized net benefit curve starts to become "bumpy"...the entire phenomena the boss or cop or politician is attempting to avoid.

This effect extends to transactions other than work-place or school discipline.  Consider the negotiator who asks what it would take if he could spend the night with the other party's wife.  Even suggesting such an outrageous proposition forces the other party to take nothing for granted and to re-test every assumption.

Trump
I am ambivalent about dragging politics into this discussion, but it is topical and serves to illustrate the concept. 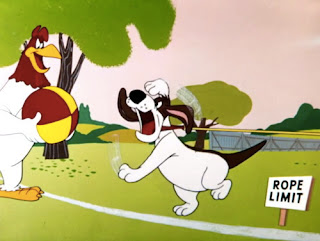 There are some who suggest that President Trump launched 59 cruise missiles to obliterate a Syrian airbase to send notice that the United States is not entirely predictable.  There are many parties around the world who feel very safe tweaking Uncle Sam's nose because they "know" the exact length of the rope.

Trump's launch of the cruise missiles replaced the rope with a rubber band and Foghorn needs to recalibrate his antics.

Cautions
It is easy to over-do the capricious and arbitrary portion of the penalty curve.  The boss or cop or politician needs to figure out the minimum "signal" that will result in a smoothing of internalized Net Benefit Curve.  Or said another way, just enough to keep the other guy on his toes.
Posted by Eaton Rapids Joe at 10:15 AM