Fake News Friday: Of Course Trump is a Fascist 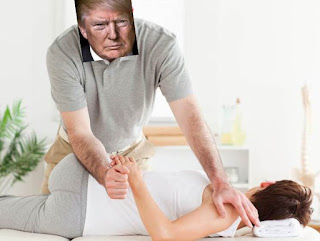 "Well of course Trump is a Fascist!!" Bob said.  All of us at coffee were stunned because Bob is one of Trump's biggest fan-boys.

"You remember when I blew out both of my shoulders when I dumped the Harley?" he asked.

We nodded.  Frankly, it was a very bad period for Bob.  He had been so negative and despairing that nobody wanted to be around him.

"The surgery went well but I just was not recovering strength or range of motion.  And then I switched Physical Therapists.  I got this Filipino woman who was the Count de Sades reincarnated.  God, that woman hurt me.  I called her every name in the book: Hitler, Stalin, Pol Pot...and yes, I called her a Fascist."

"That is what Trump is doing.  He is breaking loose the adhesions."