"I need a faster tractor" 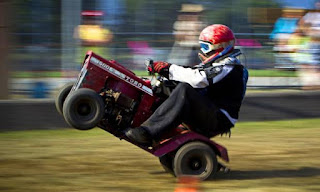 Today, at coffee, Freddie announced "I need a faster tractor!"

This surprised us.  Freddie's lawn is very small.  He mows the median of M-99 just so the can get the engine good and hot before shutting it down.  He knows that engines that don't come up to heat collect moisture in the oil.

Now, you have to have a mental picture of Freddie.  He is about five feet tall.  He says that is because he worked all his life.  Carrying heavy loads pushed his shoulders down and walking extra miles wore the tread off his feet.

His wife died twenty years ago.  His life is mostly about the waitresses who serve him food (all of whom he adores, and they adore him in return), the nurses at the hospital who he delivers donuts to on Mondays, Wednesdays and Fridays, the old guys where he goes to church...and the coffee crowd.

We were surprised that Freddie suddenly, at age 82, felt a need for a faster tractor.  We asked him "Why?" 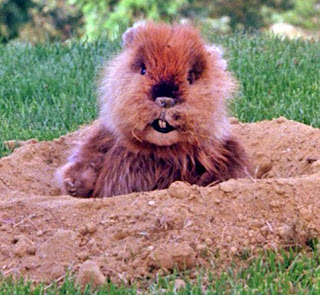 Freddie segued into the ongoing battle he has with his resident woodchuck.  It has been going on for almost fifteen years.  Given the normal life expectancy of woodchucks, it is likely a multi-generational family feud at this point.

In early spring the vegetation is thin and the woodchucks are ravenous from their winter hibernation.  They range far from their burrows seeking enough poundage of succulent spring growth to stuff their bellies.  The females are pregnant and that also dials up their caloric needs.

"I almost got him the other day.  I was a-gaining on him.  I was sure I was gonna catch him."  Freddie told us.  "And then he made it to the hole by the gay-rogg.  As noted earlier, Freddie adores girls.  Since that woodchuck is his mortal enemy it must be a male.  That is why the woodchuck is always him. 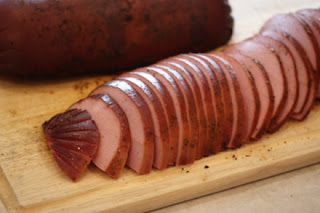 "I figure if I get a mower that is just a little faster, why, next time I'll slice him up like lunch meat."  Freddie had a bright twinkle in his eye as he foresaw the doom of his arch enemy.

That is the essence of life in a small town.  Old guys with horizons that are compressed to the next 24 hours and a fifteen mile radius.  Old guys who love everybody who helps them make it through the day.  Old guys whose highest ambition is to turn woodchucks into "lunch meat."
Posted by Eaton Rapids Joe at 7:59 PM