Reality is local and personal

Belladonna is competing almost every weekend.  This weekend it was in Southeastern Michigan so I was able to attend.  She competed in two events.  In the first event she put in a credible performance.  In the second event she set a Personal Record and bettered her former best performance by about 4%.  And so tonight she is walking on air.

The traffic in that part of the state is more than I am used to.  Drivers are crazy whereever freeways have more than three lanes of traffic in any given direction.  I was flogging the old S-10 and it was screaming along at 80mph.  Little, old grannies were passing me and flipping me the bird.  And I was still eastbound on Square Lake Road trying to get on the entrance ramp to I-75.


Instrumental for the first 1:50, so be patient.  Last four minutes is some impressive guitar playing.

I drove on Telegraph Road.  Telegraph Road is famous for being the last place Jimmy Hoffa was seen alive.  It is also famous as the subject of this song (lyrics here) by Dire Straits...a pretty neat trick, a road in Detroit serving as an inspiration for a British Band.  I also crossed Woodward, famous for the Woodward Dream Cruise when 30,000 muscle cars will "cruise the gut."

While I was in the neighborhood I stopped by the site of the old Pontiac Truck Assembly.  I worked there for about two years.  I commuted from Eaton Rapids which is 94 miles away.  My life was simple.  I drove.  I worked.  I ate.  I slept.  We ran six days a week. 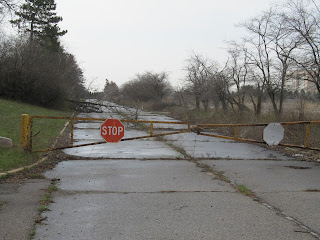 The plant was closed and torn down.  They had "Labor Issues". 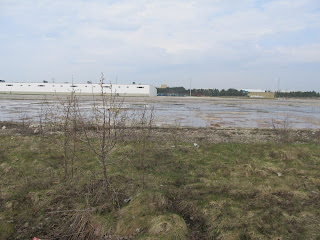 My work area was somewhere 3/4 the way to the white building.  Everything you see that is pavement used to be building. 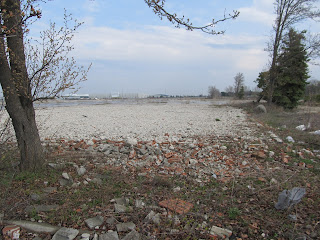 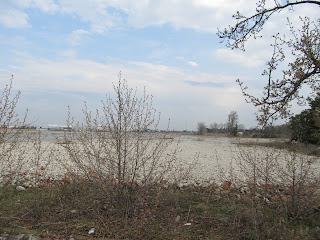 What is interesting to me is that I walked into Pontiac fully aware of its horrible reputation for Management/Labor tension.  They had the worst metrics in the corporation for unsettled grievances. But that is not what I saw.

My boss asked, 'How many do you have?"

I told him, "I have seven but need eight.  Andy wants to play cards."

I think the committeeman was in my boss's office during that conversation.  About six minutes later he walked into my "hutch" and informed me "I have seven dues-paying, UAW members who want to work break.  You need the trucks.  I don't care what you do as long as the seven UAW members work and get paid that break."

He meant exactly what he said.  I put on a baseball cap (which became code for "Don't look at me.") and went out to learn Andy's job so I could cover at break.

For the rest of my 24 months in the plant it was a rare day when I did not work at least one break and I usually worked two of them.  To the best of my knowledge that was unheard of in a UAW plant.  One of the most common grievances is a Paragraph 215, "Management doing hourly work."

I covered Andy who like to play cards.  I covered Phil who was recovering from cancer and got tired.  I covered Bob who had a girl-friend in Flint and came to work on Monday greatly sleep deprived.  I covered "Jeep" who was on dialysis.  I covered "Weasel" who was independently wealthy and took days off whenever he wanted.  I loaded floor pans and welded hinges and installed heat shields.  I did MIG weld repair when the welding poured weld sparks into the welder's lap.

John Rambo realized that not letting me work meant that seven of his guys would be shorted some overtime.  A side factor was that he would also get paid the break if ten of his guys worked.  I always wondered where he found the other three guys to round out the ten.

For me, it drove home the lesson that all reality is local and personal.  The Plant, in the global sense, could be in the toilet but my personal reality was defined by the the people I worked with every day.