A great day for working outside

It was a great day for working outside. 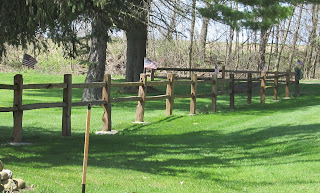 As reported earlier, I have been spending a lot of time in Salamander's Orchard.  The other half of the operation is on the other side of the road.  There is a cottage, a beach and several outbuildings.  The guy who ramrods the operation on the east side of the road will be known as "Hero".  No sarcasm.  It is simply a name that works for him.

Because the wind was out of the southeast I was able to spray the cattails without the over-spray drifting out into the lake.  I took a pair of beater shoes and waded out into the water so I could spray with the wind.

Then I mowed the ditch with my push mower. 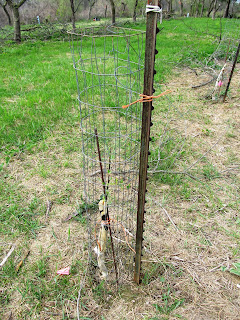 I started "armoring" the new apple trees against deer.  A thirty inch piece of 2X4" welded wire makes a cage that is about 10 inches across. 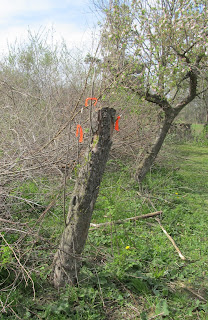 I marked the grafts I top worked some trees to.  This one looks pretty severe, the entire top had died so I whacked it off where the shoots were coming out.

Then I dragged brush and mowed in the western most aisle way.  Dragging brush is starting to lose its appeal. 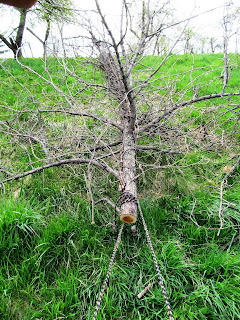 This is the top of a pear tree.  It is covered with Poison Ivy.  Normally I would cut something this big into two or three pieces but I did not want to cover myself with Poison Ivy sawdust.  Mrs ERJ loses her sense of humor when I give her a rash.  So I tied a rope to it and dragged it out of the orchard and down to the swamp.  Salamander will have to be a little bit careful when he pushes this one in.

Not a great day for blogging but it feels like a got a lot done.