Dishwashers: No joy in Mudville 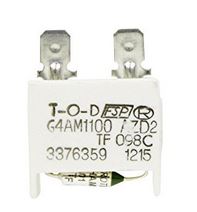 Mrs ERJ asked if I have a plan.  I am glad she asked.  I am starting to see this as a challenge.

I don't know if this device kicks out on temperature or on current.  In some ways it does not matter because a current spike will raise the temperature.

I know a little bit about current. 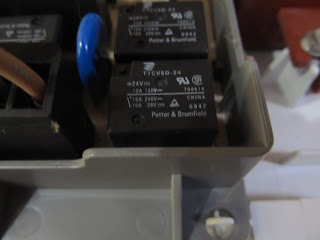 The controller unit has three relays in it.  Relays are electrically powered switches.  A very small amount of power, sometimes called a low-power control circuit, is used to open-or-close the switch.  The closed switch completes a power circuit.  That is one way that efficient, low power integrated circuits can boss around big, ugly, high power applications.

There are two kinds of relays.  Latched and unlatched.  Latched circuits stay closed even when power from the control side is removed.  Unlatched relays are like throwing a beachball into the wind.  They stop doing what you want as soon as you remove the power.  This type of relay T7CV5D-24 is an unlatched relay.  It uses 0.36 Watts of power and can switch 2800 Watts of alternating current (a ratio of 8000!)  Off-the-shelf it can turn the power on-and-off in five milliseconds.

The relays are sealed units but sometimes crud (plastic shavings) can collect inside of them and slow down the response time.  If the logic cuts things close, it is possible that one relay is keeping the electrical resistance heating unit powered up while another relay starts the pump motor.  Motors typically draw two-to-three times their rated current (called in-rush current) when they start.  The fix is to buy three new T7CV5D-24 relays and swap them all out.  Potter and Brunfield no longer make this unit but an identically named relay is available from Siemens.  They cost about $2.50 each.

Replacing all of the relays would also correct that failure mode.

Short circuits
Another possibility is a short in the motor.

The smart money would be to put inductive pickups at various locations in the device and cycle it.  The problem with smart money is that it takes, well, money.  I would need a better multitester and I would need to load oscilloscope software on my laptop.  Someday....
Part of what makes the shorting motor hypothesis unlikely is that the fuse is on the "white wire".  In-home, 110V wiring is actually half of a 220V, single phase.  One wire, the black one, is supposed to be "hot" and the other wire, the white one, is neutral.

You might ask,  "Why is there a third "neutral" wire (typically bare) if white is neutral?"  The short answer is that having two grounds ensures that the devices really are grounded in the event that one of the wires loses connection to the true, earth ground.  The white wire has the potential to back-feed voltage into the device should it lose a good connection to ground in the breaker box.  The bare, "neutral" wire still has the power to wick off voltage because it is not (should not be) actively involved in any power applications.

A short-to-ground would reduce the current going through the white wire if the electricians who wired the house in the 1970s followed the National Electric Code.  It is still something worth checking.  Unfortunately it means I need to pull the unit so I can get at the wires.  The test is to ensure that the power is on and to check the voltage between the bare wire and the white wire.  It should be very, very small.

An additional piece of evidence that suggests that this is not the problem is that the unit successfully completed "Cancel-and-Drain". The motor spun up and the pump worked.  I would have expected a short circuit in the motor to cause problems during Cancel-and-Drain.

I do not know who wired this building.  It is possible that they thought it simple did not matter which wire they used for AC current.  Consequently, it must be checked.

Degrade plans
"Degrade" plans are plans you put in place for when plan A, B, C...fail.   What is the absolute, bare minimum that is expected out of a device?  Can the device function at the "degraded" level?

What will I do if the wiring is to NEC standards, I swap out the relays and the unit still fails to complete its cycle?

The final "Degrade" plan would be to pull the heating element and see if the unit runs.  We never used the "dry" feature so we would not miss that.

I would miss the "Pots-and-pans, heated wash" feature because I put the dishes in dirty.  Mrs ERJ washes them first and then puts them in the dishwasher.  That must be one of the differences between men and women.