Furnace and A/C are working!!!

I think the guy who installed this in the furnace was colorblind.

But rather than straighten out the world, I just mindlessly wired the new unit exactly like the old one. 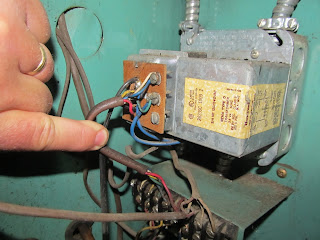 Except I did not like the short wires between the bus shown in the bottom photo to the fan center.  while it looks tidy it means that fat, old, nearsighted men have to squat on the ground and do all the wiring inside the device.  It is SO much nicer when you can detach the device and hold it in your lap as you switch it over, one wire at a time.

Fan works.  A/C works.  Heating function bypasses the fan center and the fan powers up based on a temperature switch in the heat exchanger.  I think we are good-to-go!
Posted by Eaton Rapids Joe at 12:45 PM