I was talking with the owner of a commercial orchard earlier this spring.  I was sounding him out to see if he would need any grafting done.

He informed me that his orchard had abandoned the practice of "top working" fruit trees to more profitable varieties.  He listed many reasons.  One reason is that his older trees are on obsolete (read, less productive and too big) rootstocks.  Another reason he listed was that top worked trees were excessively vulnerable to wood rot and tree death, especially the blocks that were being grown organically. 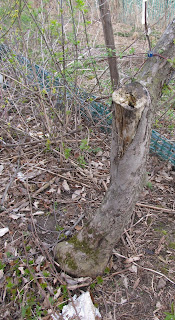 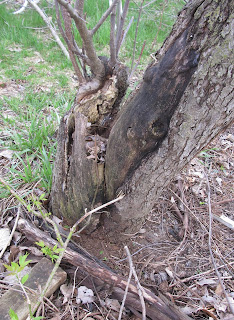 Monument trees
Trees that are notable for extreme longevity typically share a couple of characteristics.  Not surprisingly, their wood tends to be highly resistant to decay.  Consider for example, redwoods, live oaks and cypress trees.

Another characteristic is that they tend to be relatively vigorous growers.  Decay always finds a way into the tree.  Tree species with exceptional longevity have enough vigor that the incremental girth on the outside of the trunk and branches out-runs the decay pursuing from the inside.

Apple wood in inherently very susceptible to decay.  A sixty year old apple tree is a rare individual.  What allowed them to live that long was vigorous roots and vigorously growing tops.  In other words, old apple trees are trees that put very few calories into making fruit.

The current trend in reducing tree vigor via dwarfing rootstock and supporting the trees (which almost turns them into vines, very little increment in girth occurs) is known to reduce tree life but this is not currently seen as a problem.  The market for apples is extremely volatile.  Most cultivars become obsolete (i.e., unprofitable) in less than twenty years.  The orchard manager has to run faster and faster just to stay in place.

However....
It might be useful to survey the genus "Malus" to catalog any natural variation in rot resistance because someday that trait might be useful.  Malus contains a large diversity of genetics.  Species can be found world wide and some of them grow in warm, moist environments  which are conducive to rot and others grow to be exceptionally large specimens, already seen to be correlated with rot resistant wood.

How to test for wood rot-resistance
This is Ph.D level work* a seventh grader could do in his/her basement.

Take a "Banana box", line it with a plastic bag, alternate layers of sawdust media and samples.  Leave in a warm place for six months and then assess the samples.

Design of Experiment
Media is fresh sawdust that is inoculated with decay organisms and moistened with nutrient solution.  The decay organisms can be collected by spreading a tarp and turning old, punky apple stubs into sawdust with a chainsaw.  Add apple stub sawdust to fresh sawdust and nutrient solution and turn in a cement mixer for four hours.  Allow the excess nutrient solution to drain from the media for a couple of hours and then used in the boxes.  Save some of the media for inoculating future experiments.

Sample prep
Weight loss as a percentage of the "dry weight" will be used as a proxy for the amount of decay.  That makes it necessary to determine how much of the sample's fresh-weight is water.

Select shoots that are 30 inches long and are a minimum of 1.5 inches in diameter at the base.  Cut the sample into  five segments as shown.  There is no need to remove the bark.  Carefully label each segment.  Take the center segment (straight cuts) and dry it using any suitable means (microwave, common toaster oven).  Then divide the dry weight by the as-cut weight.  The dry weight of the remaining pieces can be estimated by multiplying their green weight by the fraction just calculated.  This procedure must be followed for each shoot as each shoot might have a different dry-weight/green-weight.

Each sample must be weighed and its "green" weight recorded.  Make a hard copy of the data.  Copy  onto a thumbdrive and put it in a safe.  It sucks to put six months of effort into a project and find out that you lost important data.

The four pieces with slanted cuts on one of their ends are called "replicates".  The variation in dry weight loss observed within the replicates will give the experimenter a sense of how much variation is significant.  If the experiment is too large to contain in one banana box then the replicates should be spread across several boxes to not confound species variation with box-to-box variation.  An additional step would be to select a commonly available domestic apple cultivar (like Golden Delicious or McIntosh) to use as a control.

At the end of six months, remove the samples from the boxes being careful to ensure the labels are not dislodged from the samples.  Blow the sawdust media off each sample.  Dehydrate the samples using the microwave or oven.  Weigh each sample and determine the % weight loss.

Shortcuts
An experimenter who had limited resources could make use of survivor bias to narrow the range of species tested.  Many universities and older arboretums have large, old crabapple trees.  As noted before, "old" is correlated to "decay resistant". Those crabapple trees would be excellent sources of samples if you can get the grounds keepers help.

One risk of selecting samples from old trees is that the samples are likely to have disproportionately more heartwood than young, vigorous, orchard grown samples.  It is worth considering taking photos of the ends of the samples to capture heartwood/sapwood variation for future evaluation.

Another shortcut would be to search through documentation regarding species with exceptional maximum sizes (Malus sieversii, for instance)  or species from exceptionally challenging climates.

*Ph.D level work is a leap into the unknown.  A Ph.D student will typically pursue several thesis at the start of his program because many of them will peter out.  Master's thesis typically involve attempts to replicate (and substantiate) Ph.D research.  I consider this Ph.D level work because nobody has done this with Malus.
Posted by Eaton Rapids Joe at 10:34 AM