I walked Zeus around the block. He is frantic when we put him out in the kennel. He appears to be a dog with a very high need to be with his pack. With Herc gone, Zeus is alone in the kennel and he does not like it. We are his pack and we are in the house.

We saw a Pileated Woodpecker on our walk. You can recognize them by their swoopy flight from a great distance. They are the size of crows but typically solitary or a mated pair. They have a fly-coast-fly pattern of flight and the path is reminiscent of a telegraph wire stretching across the prairie.

They also fly with a head-up attitude like a boat with an outboard motor with too much weight in the back.

I purchased a grate for the fireplace insert. I had been holding the wood up off the firebrick floor with a couple of 1-1/2" diameter pipes I had salvaged. Unfortunately, 1-1/2" was not a tall enough passage-way and would clog up with coals and ash. The new grate has a floor that is about 3-1/2" above the firebrick.

The reduced headroom makes it more challenging to put larger pieces of wood into the firebox but it is all part of the learning process. Our insert has always shown a strong preference for smaller diameter wood.

I have been using dried Staghorn Sumac wood as kindling. It burns like it was soaked in grease.

Staghorn Sumac is common around our place. It primarily spreads by suckers. The seed heads retain their berries and the birds work them all winter long. Rabbits favor Staghorn Sumac bark as winter forage when the snow is deep.

The seeds appear to need fire to germinate since sumac sprouts appear around places where we have been burning brush. No, you cannot burn the seeds and have them germinate. They are atop the soil and the ones that get the Goldilocks amount of heat germinate.

The wood is soft and brittle and has a large pith, stems up to 1-1/2" diameter cut easily with a pair of long-handled loppers. Because it grows in open thickets, it produces an abundance of straight "sticks".

Make sure you have the right kind(s) of sumac if you use it for kindling. Poison Sumac is not your friend.

My youngest brother rides a dirt-bike. Dirt-bike riding can be very dusty, especially if you are not in front. My brother was lamenting the high cost of the proprietary materials used to clean and re-stickify the two-stage, foam air cleaners.

Being a resourceful young man, he looked up the Material Data Safety Sheet (MSDS) for a common brand and he determined that it was a 50:50 mix of paint thinner and semi-synthetic 2-stroke oil.

He had been concerned that using gasoline would weaken the adhesive bond used to turn sheet-foam into a foam sleeve. Gasoline can be a real dog-breakfast of hydrocarbons. Paint thinner is all non-aromatic hydrocarbons like naphtha. "Aromatic" hydrocarbons have a benzene ring in their make-up and some of them are powerful solvents.

The polybutene in the semi-synthetic 2-Stroke oil makes the foam tacky and helps it hold dust so it does not shake off under impacts.

We are back to visiting Mom twice a week.

Mom has "smart" hearing aids and one of my siblings brought the device that slaves them to the TV. The problem is that adjusting the TV volume with the remote has no impact on how loud it was for Mom.

It was confusing to fiddle with the remote and have Mom telling us that she could not hear us. Pushing the volume button on the hearing aids also had no impact on the volume Mom was hearing.

The only thing that worked was to use the Mute on the remote.

We are --->||<--- this close to being empty nesters with Kubota moved out and Bella either at work or school or hanging out with her boyfriend.

Mrs ERJ and my diet took a dramatic turn for the better. We are eating the foods we like. They tend to look like the foods we ate as kids. Remember when you could look at a plate and identify the actual cut of meat or chicken, the vegetable was clearly recognizable as green beans or peas or broccoli and the potatoes had their own corner of the plate and were baptized with gravy and you actually knew what went into the gravy? Do you remember those days?

Kids seem to like the prepared foods they are served in school cafeterias. Vats of Johnny Marzetti or lasagna casserole or gelatinous mac-n-cheez. They like deep-fried everything.

I like some of those foods too, but my body rebels at too much fried food.

This evening we had peas with a bit of butter, broiled tilapia (from Costa Rica) and about a half-cup of tater-tots from the air-frier. Portion control is easier when the food is parceled out as separate components rather than ladled out as mound of soylent-green (with electrolytes).

I prefer to look at the S&P 500 rather than the Dow or NASDAC because the S&P 500 is a weighted index that is more reflective of the universe of publicly traded stocks in the US. 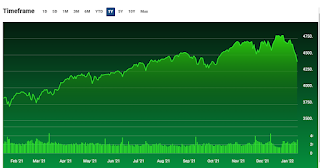 In general, I have little respect for "Technical Analysis" where analysts look for "patterns". To me it is as unscientific as throwing chicken entrails on the floor and attempting to divine the future.

One exception to that is something Joe Croyle tipped me off about. Most punters in the market are content to let minor losses ride because "they are playing with house money". Easy come, easy go.

After that money has been in their accounts for a year, they start thinking about it as "their money". That means that all hell will break loose if/when the S&P 500 drops below the level it hovered at 365 days prior.

Looking at this chart, that means that the market will puke its guts out shortly after the S&P 500 drops below 4000. The punters will stop listening to the cheerleaders who tell them to leave their money in.

The market will drop like an elevator with a broken cable and any vestiges of civility and order will depart.