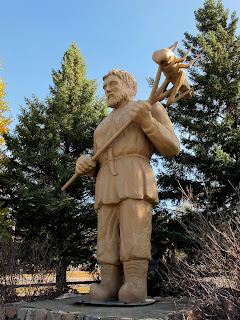 Things I never knew: St Urho is the patron saint of Finland and refrigeration.

Ooksi kooksi coolama vee
Santia Urho is ta poy for me!
He sase out ta hoppers as pig as pirds.
Neffer peefor haff I hurd tose words!
He reely tolt tose pugs of kreen
Braffest Finn I effer seen
Some celebrate for St. Pat unt hiss nakes
Putt Urho poyka kot what it takes.
He kot tall and trong from feelia sour
Unt ate kala moyakka effery hour.
Tat's why tat kuy could sase toes peetles
What krew as thick as chack bine neetles.
So let's give a cheer in hower pest vay
On Sixteenth of March, St. Urho's Tay.
Patron Saints
The entire idea of "Patron Saints" leaves many Christians feeling squeamish. It sounds a little bit too much like graven images and praying to a false-god rather than the One True God.
Imagine your grandchild was a freshman in college and was struggling to make the transition. Furthermore, suppose they studied and studied but when they went to take the tests they bombed. Their minds went completely blank or the material they studied was nothing like the material the instructor put in the test.
Your beloved grandchild approaches you and asks "Grandpa (or Grandma), I have a mid-term tomorrow and I need to do well on that test or I will fail the class. Can you pray for me?"
I imagine most of you would hold his/her hands and pray to the Almighty that your grandchild would be free from anxiety, that they had studied the proper material and that the test would accurately measure their true grasp of the material they were responsible for.
That is how we are supposed to approach "Patron Saints". We know they can hear us because of the story of Lazarus and the Rich Man. We ask them to pray to God with us and walk with us during our times of trial.
Posted by Eaton Rapids Joe at 2:23 PM