APPLETON - ThedaCare officials are asking Outagamie County judge Mark McGinnis to pause the recruitment of seven of their employees to Ascension Northeast Wisconsin, arguing the move will endanger patients in the region who need treatment for strokes and traumatic injuries.

In a Thursday interview with The Post-Crescent, ThedaCare leaders said Ascension recruited a group of ThedaCare employees from its interventional radiology and cardiovascular team. That team performs procedures to stop bleeding in targeted areas during a traumatic injury or restore blood flow to the brain in the case of a stroke.

Seven of 11 employees on that team accepted offers with Ascension and will start there next week if the court does not act, said Lynn Detterman, ThedaCare's senior vice president for its south region.

A judge has granted ThedaCare a temporary (90 day) restraining order in a dispute with Ascension Wisconsin.

Thursday morning, ThedaCare filed for a temporary injunction against Ascension Wisconsin, saying it could cause the community harm by recruiting a majority of ThedaCare’s comprehensive stroke care team.

On Friday, an Outagamie County judge ruled in favor of ThedaCare

ERJ note: Temporary replacement workers are available on a per-diem basis but they are expensive. $5000 a week for a trained Oncology nurse is not unheard of. It isn't that ThedaCare cannot find workers, it cannot find workers at wages it wants to pay.
I wonder how soon this trickles down to the workers at the Dollar Store and Krogers. "Welcome to the Hotel California, you can check-out any time you like...."
Anti-hoarding propaganda
Take only what you need 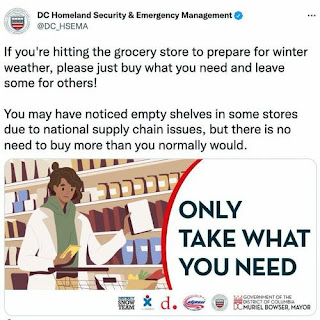 Everybody with a brain now looks at the government the way the Skipper looked at Gilligan. Ask Gilligan for advice and then do the opposite.
Romance in tumultuous times
Belladonna and her beau seem to mesh well.
My niece Lindsay has a boyfriend but none of the family has met him. It may have something to do with Lindsay's brothers' love of turning money into smoke, noise and holes in things. That, and the fact that one of them owns a backhoe.
Nothing like a small boat and a tempest to convince people to cling to one another.
Pheromones
A young person recently informed me that human pheromones absolutely do not exist. These are the kinds of things you learn in a mandatory Human Sexuality class in a public university.
Being curious, I went to scholar.google.com and searched "human pheromones".
One of the top four hits was published in 1971 so I ignored that one.
Of the other three, they concluded "Strong evidence for" "Highly likely and biologists are still searching for neural-chemical pathways" and "Likely but unproven"
The gentlest response I can make is that there is insufficient evidence to conclusively state that human pheromones do or do-not exist.
It is odd that they demand a precise neural-chemical pathway equivalent of the Kreb's Cycle before admitting that human pheromones exist but have no problem accepting scores of genders when only XX-XY-(rarely) YY chromosome combinations exist.
Posted by Eaton Rapids Joe at 11:20 PM