Get mange much, Wile E? 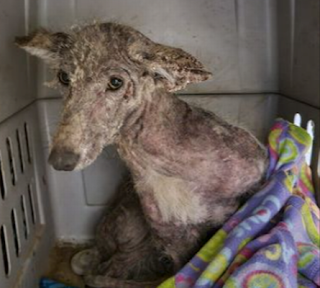 The jury is still out to lunch with regard to whether this animal is a domestic dog or a wild coyote.

Looking at the size and the tuft of hair on his forehead, my money is on "Coyote". 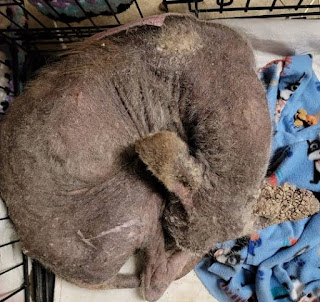 He has a tuft of hair between his shoulder blades where he cannot reach and active mange lesions on his left ear.

Contrary to appearance, mange is not a fungus or bacteria. The causal agent is a tiny, parasitic mite that tunnels into the skin and triggers an allergic reaction.

The tiny mites are a normal part of the livestock in an animals pelt. Some individual animals are more genetically predisposed to mange than others. Denning up with multiple animals to stay warm may have triggered this little guy's case. 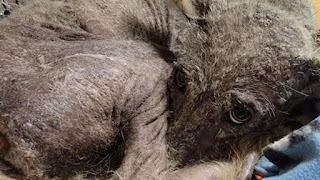 Underneath that thick pelt, coyotes are pretty slender.

Locally coyotes range from 20-to-45 pounds although I don't know of anybody who harvested one over the weight of 35 pounds. 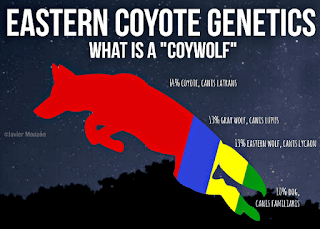 Eastern seaboard coyotes are significantly bigger. It is hypothesized that they picked up some Timber Wolf genetics as they migrated in from Ontario and Quebec. The only documented adult fatality from a coyote attack was a 19 year-old woman who was attacked in Nova Scotia. Wolf genes, maybe not a good thing.

Western coyotes are significantly smaller. A study in Utah found that the average male coyote weighed 23 pounds and the average female weighed 18 pounds.

Posted by Eaton Rapids Joe at 7:42 AM