Suppose, for the sake of argument, catching a large, Rainbow Trout was on your bucket-list.

Furthermore let us suppose you are in that wonderful time in your life when you have a few spare dollars, a few spare hours and your knees still work.

Let's refine your bucket-list a bit further, you want to catch the fish locally and you want it to be a "wild" fish. Fish stocked in a pond are for kids. You want a real fish.

How would a rational person go about that task?

Well, Rainbow Trout are not common in my part of Michigan so if it were me, I would research the environmental requirements of this species. It requires cool, well oxygenated water that is free of silt.

"...well oxygenated..." translates into flowing water or lakes big enough to have breaking waves and of moderately low fertility so the seaweed decaying in the winter does not absorb all of the dissolved oxygen.

"...cool..." either means shaded feeder creeks (Sebawa, Libhard or any one of a dozen other creeks) or deep lakes.

In an infinite universe, even the improbable becomes inevitable

It is improbable, but not impossible, to have a water spout dip into a lake, pick up a trophy Rainbow Trout and then deposit it at your front door step or in the middle of the parking lot at work. 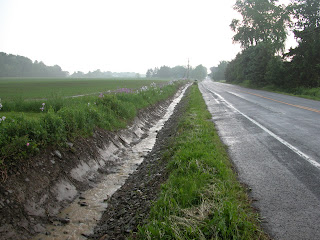 Just because something is possible does not mean that investing your time in that venue is wise. You might thread a big gob of red worms on a hook and throw it into the ditch beside the road but that is not a high-percentage way to spend your time.

If you wanted to catch a local, Rainbow Trout, the prudent person would ask around at the bait shops. Not just once, but multiple times. That is because you want your towed antenna array to seine the brain of the person running the cash register but also the old men who spent decades fishing the local waters.

Rainbow Trout are not common around here. If somebody pulled a "keeper" Rainbow out of a local lake it would have been talked about. If there was a Rainbow pulled out of Jordan Lake fifteen years ago, there might be another one there.

What to use for bait and tackle

You need to present it in a natural way. If you are fishing flowing water then you will catch five times as many fish if you can toss your bait upstream and let it drift down with the current. Alternatively, if you are at the head of a pool you can let it drift down. Baits that wobble can be slowly spooled out so it looks like a crippled bait-fish or crayfish that can no longer fight the current.

If there is ONE THING that you learn from this essay is that you won't catch fish unless you have your bait in the water. You might not think much of the water in front of you, but throw your bait at the most promising structure and you might be stunned by what you catch. 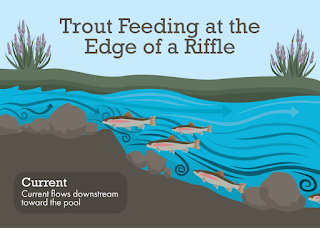 You might have a 100 foot-wide by 1000 foot-long run of water in front of you. If there are only five bits of structure in that 100,000 square feet of water, then you have a total of 150 square-feet of prime habitat to fish.

This is not a time to be an idiot savant. You might catch a monster Brown Trout.

It is not exactly what you had in mind but a big Brown Trout is a fine prize in its own right.

Or you might find the mother-lode of Smallmouth Bass. Again, not the trophy you had in mind when you loaded up your gear and pulled out of your driveway.

Be prepared for success. Take your fishing tackle with you everywhere you go. Wet your line in whatever waters are available. If your dream is to catch a 4 pound Rainbow, then bring a net big enough to boat a 12 pounder. It can happen.

A change of topics

I know a little bit about fishing. I make no claims about knowing anything about boys finding girls.

However, there may be some parallels (no disrespect intended to my women readers).

If your son or nephew was looking for a woman who is not CRAZY-WOKE, he might want to avoid places where the overwhelming majority of the women belong to that species. Fishing for a conservative woman in the middle of a pro-choice parade will be as productive as fishing for Rainbow Trout in ditch-water.

"I guess that means colleges and universities are a NO-GO"

Not so fast, Buckwheat.

The higher education industry sucks in a very diverse set of students. Some of the women may look "woke" but it is a reflection of the water they are swimming in. Because of family background, the neighborhoods they grew up in and the schools they went to, they may never have SEEN a conservative or had the differences explained to them in a way that was not totally dismissive and disparaging.

Remember the advice to fish the water in front of you, even if it does not look promising? If there is a stretch of water with almost no structure (boulders, snags, pools, sand-bars, back-eddies, etc.) then all of the truly worthy fish will be drawn to the tiny bit of structure that does exist. Even if that structure is not aesthetically pleasing...it could be a junked car or a shattered, concrete culvert.

That translates as figuring out where the prime 150 square-feet are (or by process of elimination, writing off the 99,850 square-feet of poor fishing).

I am old enough to remember when computers were slow and core-storage was expensive. Legacy software written for database searches would "Get data" from tapes, trickled into core, tested against ONE criteria and then written back out to tape.

Then the process was repeated for the second level search criterion and so-on and so-forth.

As the person writing the database search, you had control over the order in which the searches were done.

The efficiencies become even more startling when you have 6 or more criteria.

What does "search criteria" have to do with finding a conservative girl?

A very small percentage of girls at college are involved in athletics. That might be a good place to wet your line because athletes know that the effort you put in on the practice field shows up on game day. They can link process and results.

A very small percentage of girls rehab houses or volunteer for Habitat for Humanity. You cannot "cheat" and cleanly paint a wall. Process-results.

Fishing and hunting and gardening are outcome focused. Maybe it is awkward to ask if their parents or grandparents taught them how to fish, but it is a great sign if you invite her fishing and she is willing to give it a shot. 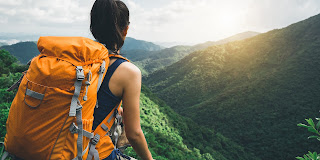 Girls who hike and camp understand that you will be miserable if you don't pack the right items in the right amounts. Again, process-results and not much ideology.

Some "majors" will assist you in your search. The crazy-woke value ideological purity over results. Majors like nursing are outcome oriented and conservatives, who are inherently compassionate, will gravitate to that kind of major. Accounting, hard-sciences, agriculture, music are a few other outcome focused majors.

Any kind of liberal arts, social sciences, urban development are not. That doesn't mean you don't pack your fishing rod and landing net. Some kids end up in those majors because they listened to a biased academic advisor. Just don't fish those waters at the expense of more productive ones.

Posted by Eaton Rapids Joe at 9:58 AM