Weeds and a dirty picture (legs)

There isn't much to do while pulling weeds except to think.

We live in a time when "diversity" is valued above all else. At least in certain circles.

Most of the weeds I am pulling are Lambs-quarters (Chenopodium species.) and most of the rest are Red-root (Amaranth species). Both of them are edible with the Lambs-quarters being a very fine pot-herb as long as you only pinch off the tender tips.

If for some reason I could not grow potatoes or grain, I suppose I could find some way to pickle the tips for winter use. Clearly I would struggle to have enough calorie intake and the volume required to store the "silage" would be astronomical but I suppose it could be done.

When I was younger I bought into the "can't we all get along" tripe. I gave it a try. Surely I could provide enough water and fertility so competition would be rendered moot.

Actual, on-the-ground experience quickly proved that weeds grow faster than most garden plants. Juicing up the ground with supplemental water and fertilizer resulted in the weeds over-topping the more desirable crops and choking off their access to the sun.

The fundamental difference between a garden plant and a weed

The fundamental difference between a garden plant and a weed is that the garden plant has been selected because it diverts a significant portion of its photosynthesis output to products that are directly useable by humans.

If weeds are edible, it is incidental to their attempts to out-grow their neighboring weeds. Toxins are usually metabolic byproducts and are toxic to the plant but confer a competitive advantage because they are MORE toxic to the animals that would browse them.

If we want to have nice things like fried potatoes and mashed potatoes and squash and BLT sandwiches and sweet corn and watermelon and the like, we must vigorously suppress weeds in the spaces where we grow them.

There is no other way. I tried.

Back when far more people gardened, there was no agonizing over the proper response to people who played "the knock-out game" or who ravenously consumed resources and blocked others from those same resources. They were recognized as "weeds" by their actions and by the impact they had on other, productive people.

Logically, it would seem that we could give people enough that they would not covet what others have. After all, we live in an incredibly affluent society. Sadly, it never works out that way. Lovely theory and wrong, wrong, wrong. 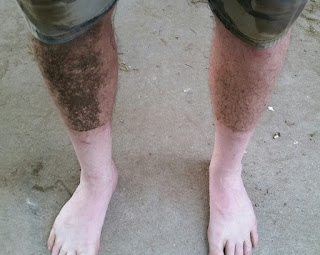 Mrs ERJ cocked an eyebrow and asked "Why is your right leg so much grubbier than your left?"

In the past I had issues with the weeds I pulled coming back to life. I threw them down on the ground between the rows and a rain would come and the rootball would melt into the ground and resume growing.

One summer, I pulled the same weeds so many times they looked like cork-screws.

The key seems to be to knock the dirt off the roots so the weed quickly dries out in the sun.

In the heat of battle, sometimes the most convenient object to bash the weed's roots against is my shin.

I am right handed.