Remnant: A Monument to God's Glory 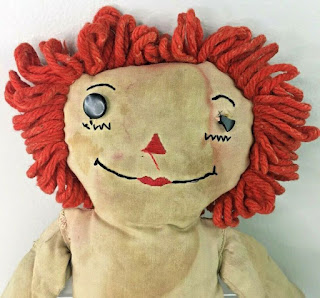 Carmen had fallen asleep. She startled when she heard the hinges of the outside door creak. Disoriented, she felt the trailer shift slightly as Steven put weight on the landing outside the door.

Carmen had grown tremendously in the last two weeks. She had been carrying a load that would have staggered most men.

She had been working full days, preparing baskets full of food for “Her guys” and then entertained them with two hours of stand-up entertainment. That, and all the walking and carrying.

The transition had been so fast that she had not had time to process it. One day she was a flirt and a lightweight. A few days later she is the only viable hope her people had to evacuate Fabulous Acres. It was nothing she had prepared for. It just happened.

Steven swung the door inward. It was bright outside. Carmen had no idea how long she had been sleeping.

He gently tossed a doll, a Raggedy Anne doll with red-yarn hair, over toward her. “You need to tell your friends to not drop things like that. This is not the first time I had to pick up after them.”

Carmen must have been woozie from waking so abruptly from her sound sleep.

“Not the first time?” she repeated.

“Yeah. I started poking around shortly after you showed up. I figured out that you were distracting us for some reason about ten days ago.” Steven said.

“You didn’t say anything” Carmen challenged him.

“I didn’t need to” Steven said. “I was enjoying your company and I figured that you would tell me when you got around to it.”

The load that Carmen had been carrying evaporated. She was not alone. Steven had figured out her secret and had kept it.
*
Never bet against biology.

Put a young, virile man in close proximity to a young, fertile woman and biology takes over. Then throw in the possibility that there might not be a tomorrow.

The young ladies were every bit as willing as the men.

And then after partaking of Mother Nature’s sleeping pill they fell asleep.

Upon waking, the women took a good look (and sniff) around and decided that the digs needed a good scrubbing if they were going to stay.

In short order, the men were scurrying about looking for buckets, scrub brushes, soap and the like.

It might not have been what they wanted to do but the women suggested that their time together would be more pleasant if the bedding was washed and if the floors were not sticky.

Being thrown together by fate might not be the best way to meet your mate, but never bet against biology.

That night, another 120 sojourners passed by the Customs Station.

To Carmen’s surprise, Lousia brought the tamales and she was accompanied by three of the girls who had not been chosen. Each woman carried a basket of treats they had made with their very own hands.

The 120 sojourners passed through and did not leave any trash or other indications of their passing.

Carmen gave Louisa the doll. There was a very sad girl somewhere waiting to be reunited with it.
*
Eaton Rapids staggered under the impact of so many migrants in two days. It wasn’t just the sojourners from Fabulous Acres although they were the most visible portion.

The second batch of 120 included Joyce and Rod Wagner and one of the Elders from the church. It was perfectly obvious to Joyce that the local churches should be offering aid to the migrants fleeing the brutal city.

However, those churches wavered. Not to put too fine a point on it but their desire to step-up was less than tepid.

By Rod’s figuring, the First Christian Church of Eaton Rapids could easily hold 80 families or almost 400 people. Rodney estimated that the church had 40,000 square feet of floor space and Rod knew that many of the families from Fabulous Acres were comfortable living in much tighter confines than most “Americans”. In fact, he knew that many of those families had lived in two-car garages at some point in the past. That is a scant 600 square-feet of space.

On the other hand, the interests of the church were in the hands of Odette Meissner, chairperson of the Church Board.

Ms Meissner had campaigned relentlessly for three decades to obtain the post and once attaining it she had ruled with an iron fist for the next twenty years. Meissner ferociously defended 1st-C’s dominance as the most socially advanced congregation in the community.

Meissner made a point of approaching new business owners and pointing out the benefits of being enrolled as a member of 1st-C.

Most business owners said something vague and non-committal like “I will think about it.”

After asking around, they learned that Meissner had no qualms about spreading rumors about people who chose to not affiliate with 1st-C, or worse, chose to affiliate with another denomination. In Meissner’s mind, the other churchs were...well...not really Christian.

Reputations in small towns are easily poisoned. Most businessmen went with the flow. They registered with 1st-C and sent in very nominal donations but never attended.

1st-C had choir rooms and classrooms and libraries and soundproof recording rooms for musicians. 1st-C had an industrial kitchen and a “general purpose room” and storage rooms and sheds and garages and rooms dedicated to “crafts”.

The very idea of letting people from third-world countries camp in her church was repulsive to her. She had heard the stories and even seen videos of people using the streets for bathrooms. She had worked far too hard and far too long to turn 1st-C into a monument to God’s Power and Glory to see it turned into a bathroom.
Posted by Eaton Rapids Joe at 12:30 AM