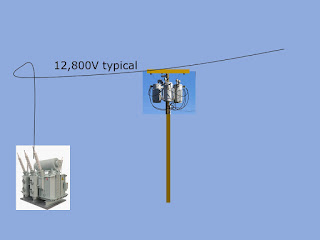 The headlong rush into green energy has many concerned about the capacity of our electrical system. Very roughly speaking, the issues can be lumped into Generation, Transmission (say 50kV and higher) and Distribution (45kV and lower).

This work of science fiction deals with the Distribution.

One overwhelming factor regarding the Distribution system is that there are millions of miles of line and tens-of-millions of transformers and hundreds of millions of poles and billions of 120V/240V devices. The raw materials required to upgrade to support universal battery powered vehicles and electrical heat-pumps (in lieu of furnaces) is potentially staggering.

There are three options for increasing energy delivered. Deliver the same Wattage over a longer period of time. This is a non-starter in a solar powered universe because the sun does not shine at night.

Or we can increase voltage of the distribution lines. At this point, increasing the voltage appears to be the single best option. 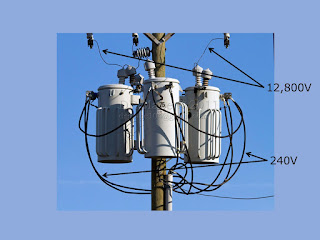 Painting with a broad brush, the major changes that would be required to increase the voltage would be modifying the transformer(s) to step the higher distribution voltage down to the 120V/240V.

Even a half-cycle (8-thousands of a second) of over-voltage is enough to fry semiconductor chips. While 0.008 seconds is a long time for computational semiconductors, it is a very short time for mechanical switching equipment. So one of the very critical dilemmas is: Do you shut down all customers on a leg or do you double wire and double transformer the poles and switch them over one-at-a-time?

Another issue that pops up is that 40kV is far more likely to start fires than 13kV. That is one reason why electric fence chargers are restricted to a maximum of 10kV. Before anything else would be done to up-voltage the leg, the poles must be inspected and any marginal poles must be replaced before more weight is hung on them and they are subjected to the forces of crews working near them and bumping them.

Regardless of whether you double-wire/double-transformer or choose some other option the utilities will need to refresh any poles that are the slightest bit dotty.

Then the insulators must be up-graded.

Then the capacitors must be inspected to ensure they are 40kV capable. "What is a capacitor?" you ask.

Capacitors are a very short-duration energy storage device that are installed on distribution lines to counter-act the tendency of some kinds of loads (motors, for instance) to shift the current and the voltage.

None of what is written above qualifies as science fiction. It is background.

This proposal was inspired by the events that were described in the post about the project that went into the ditch. 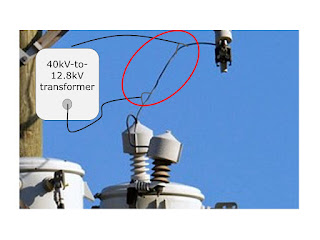 The proposal is to rehang the 12.8kV lines (for instance) from 45kV capable insulators. Then to install a small second transformer capable of stepping the 40kV (or whatever the utility chooses) to the current voltage near every existing transformer. The auxiliary transformer will have its input and output wired to the line feeding from the distribution wire spaced about 12" apart.

Additionally, if the leg is long and difficult to access quickly, the line could be converted in segments if portable transformers of adequate capacity were tied into the line the same was as shown above.

They will do NOTHING until the link between the step-down transformers are severed.

Imagine that every place the linemen installed a step down transformer also had a device similar to the concept illustrated above. A couple of perf-charges set up just inside the lines to the 3:1ish step-down transformers. The charges are wired together to fire simultaneously.

Presumably they would be fired via a wireless arm-fire sequence and the length of wire and the hardware that held the device clipped to the wire would be propelled/drop into the catching basket where a sensor would verify that the feed wire had not just been severed but that a length of it had been removed.

This sequence would also include the closest large, portable transformer that segmented the distribution line.

At that point, the devices being fed by the 3:1 step-down transformer --> original transformer and the line downstream from the closest large portable transformer would be receiving approximately 40V.

If all the sensors registered that all segments had been appropriately severed, the feed could be stepped up from 12.8kV to 40kV. At that point, the overhead wires would be 40kV up to the first large-portable used to segment the task. The line downstream of the large-portable would still be 12.8kV.

The crew would inch-worm their way down the leg. If the sensors indicated a malfunction, they would boogie to the problem and fix it. It may simple be a case of the wire segment missing the basket. Once the crews had verified all issues were fixed the isolated segment could be flipped to the higher voltage.

One would hope that the reliability of the perf-charge device would be high enough that manual intervention would be rare. In those cases, flipping from the 40V in-process voltage at the house back to the 120V/240V should be less than a second.

My understanding is that the 3:1 transformer can be relatively small because it is handling relatively low amperages.