I have two major weeds in my orchard/vineyard: Nettles and Virginia Creeper.

Nettles are a fast growing, perennial that spreads by the roots and by seeds. It grows tall and it stings.

Virginia Creeper is not related to the Delaware Creeper. It is a vine that produces fruit much loved by wildlife.

Both weeds grow quickly because they don't have to invest many resources in structural support. The nettles are "turgid" meaning they support themselves (at least partially) by internal water pressure. Virginia creeper, being a vine "borrows" support from trees, posts, nettles and other tall weeds.

Freed from the energy-sink of needing to support themselves they spread like wildfire.

So far, no tool other than herbicides comes close to the two-handed billhook for controlling the nettles. The billhook stands head-and-shoulders above every other mechanical means. 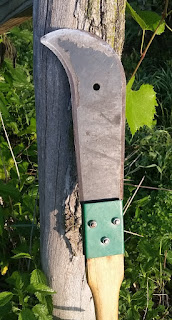 It can be used many different ways; from broad melee swings cutting down broad swaths of nettles to holding the blade vertically to insert it between a grape vine and a clump of nettles, rotating 90 degrees so the hook is facing the nettles and pulling it out rapidly.
The long handle means I don't get brushed by the falling stems.

One thing I really like about this model is the extremely stout connection between the handle and the blade. I went on the internet to get pictures of billhooks because I am lazy and did not want to walk out to the barn for a photo-shoot but none of the images I found had this kind of handle-blade union.

Mrs ERJ gave me permission to blog about our experiment.

As it happens, we had two different pictures of how this experiment would unfold.

Mrs ERJ's thought was that we run it as a surprise start, come-as-we-are experiment. Her thinking is that sooner is better and we will learn more if we don't give ourselves too many favors.

I heard it primarily as "eat what we grow with an assist from the pantry". Several years back I did a "survive on emergency rations" experiment and I only lasted two days before constipation kicked in. The low-fiber food in the buckets locked me right up.

Search for the Pink X

Popular culture being what it is, we no longer talk about "smoking guns" in industry but use terms like "Find the Red X" where the Red X is the parameter that dominates the performance of a process...generally for the worse.

You cannot fix the process until you find and control the Red X.

There will be times, especially when the process has been drunk-and-disorderly for an extended period of time, when other junky inputs snuck in. Many times those junky inputs are hairbrained ideas that predecessors thought would "fix" the process. We are talking wing-of-bat, eye-of-newt stuff here.

The likelihood of the process being in control with all of MacBeth's extras is remote. The wob and eon don't dominate the output but they are additional noise that can still produce unacceptable levels of unpredictability.

In industrial new-speak, those are called the Pink-X and sometimes the Pale Pink-X. Their contributions are virtually invisible until you nullify the Red-X but they are there, waiting to bite you in the nethermost.

The temptation is to look past the Red-X and look for the Pink-X because everybody knows about the Red X and it is boring. But there is little point in looking for the Pink-X if you are going to run headlong into the Red X.

There is little value in chasing after the Pink-X in food security until after you have the Red-X nailed down. 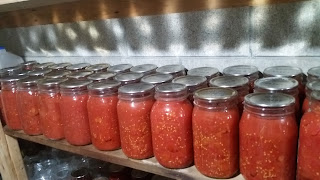 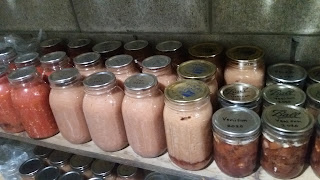 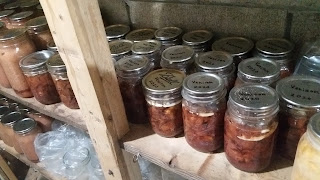 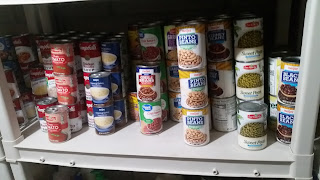 I looked through our pantry and freezer and saw tons of food for making soup. What I didn't see much flour. There is a reason for that; flour has a shelf-life that measures in double-digit months and flower likes it drier than our pantry.

Rice is OK but I really want rolls or bread with my soup.

So our Design of Experiment has been modified. Instead of a come-as-you are experiment we are going to buy 20 pounds of bread flour.

Bonus chart (applies to adults and not growing children) 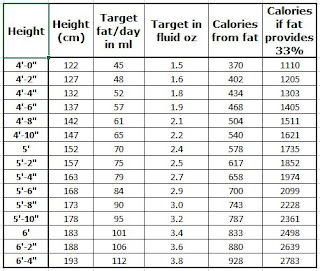 The official ERJ fat budget. It is based on height so it does not matter if you are a rake-handle-thin 18-year-old or a sixty-year-old with love-handles. Using weight as the basis for your calculations results in the thin (active) 18-year-old getting far fewer calories than the sedentary sixty-year-old and that is the opposite of what is needed.

And you would be right. A gallon of vegetable oil would last a typical man six weeks and a typical woman seven weeks.

The thing is that we are already eating more fats/oils than called for in the chart. In many cases much more.

The fats/oils are hidden in processed foods. McDonald's french fries (typically thought of as a carb) have 43% of their calories from fats. A fried chicken thigh (protein)  has 65% of its calories coming from fat. Frozen taquitos and pizza-rolls run between 45% and 50%.

The vast majority of what will come out of your garden or store in your pantry will low-to-very low in fats. In time you would be able to adapt but in the short-term you will be incapacitated by a sudden shift to a diet where only 10% of your calories come from fats and oils. 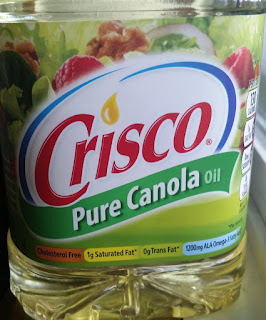 Plant breeders have been selecting for strains of sunflowers, canola and other oil-crops that have a high percentage of oleic acid (which takes an eternity to go rancid) and lower percentages of the components that do go rancid

My guess is that Crisco is using the latest canola releases and may have packaging that inhibits oxygen infiltration. These 48 oz bottles even slam-dunked the gallon jugs for shelf-life. Gallon jugs usually fare well because they have a lower surface-area-to-volume ratio and that slows the relative oxygen loading.

So if the SHTF, skip the flat-screen TVs and high-end cologne and load your shopping cart with bread flour, tubs of lard and jugs of vegetable oil.

Posted by Eaton Rapids Joe at 9:29 AM