One fine, crisp winter day he was driving his truck in hilly terrain. He crested a saddle and looked down into a hanging valley with about 10 or 20 acres of willow-scrub.

There was a young man parked beside the road. There was a dead, field-dressed moose at the back of the truck.

Ron stopped to help. The man had a winch but somebody still had to flip legs and such to get the moose loaded.

Ron's curiosity got the better of him. "How did you drag the moose to the road?"

Moose are enormous. Willow scrub is treacherous footing and the snow was very deep. The man could have dragged it out bit-by-bit if he had a long rope and used his truck but there were no truck tracks or rope in evidence. 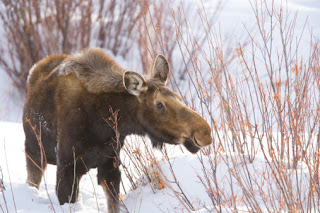 The man replied "I came over that hill just like you did. I saw this bad-boy out there munching twigs. I could see he had been out there a while by the trails he had pushed through to get to fresh twigs and how chewed down the brush was next to his trails."

"I didn't need to be anywhere in particular today and I had a license, so I strapped on my snowshoes and tromped a path from the side of the road into the middle of the willows. I stomped it down good."

"Then I loaded up the ought-six and waited about fifty yards yonder."

"He came down that trail, happy as a clam to have lots of fresh twigs available.

"When he poked out his head next to the road, I shot him below his ear. Then I backed up my truck and waited for you to come along."

Posted by Eaton Rapids Joe at 9:33 AM