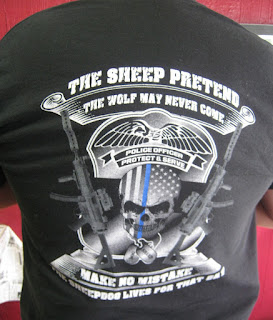 Sometimes, as parents, we wish that our children not follow in our footsteps.

Belladonna went camping this past weekend.  It rained.  Her phone got soaked and now it does not work.  Like father, like daughter.

She shopped with great energy and found the replacement phone she wanted for $450.  It was 25 miles away in the city of Jackson, Michigan.  Jackson, Michigan is famous for once having the largest walled prison in the world.  The woman was selling her phone because her car needed repair work.

Belladonna asked if I would come along as she knows that meeting strangers in the place of their choosing while carrying $450 is not always healthy.

The woman was 15 minutes late which seemed a bit odd as we were right outside her apartment building.  Belladonna played with the phone a few minutes and said she wanted it.  She counted out the money and the woman disappeared back into the 36 unit apartment (I counted drier vents while waiting).

Forty seconds later, as I was pulling out of the parking place Bella said, "Crap!  The phone is locked.  I need her password!"

How do you call somebody who just sold you their phone.

After many futile attempts, Bella sent her a message via Facebook.  And now she waits.

I suggested that Bella offer the woman another $20 for the password.  After all, it is inconveniencing the seller a little bit and it is gracious to offer compensation.  Karma can be a bitch or karma can be your friend.  It is much, MUCH better to have Karma be your friend.

The trip down
To kill time on the drive to Jackson we counted vehicles parked beside the road that were for sale.  We counted 16 in the twenty-five mile trip.

The government judges we are in a recession when we have two negative quarters in a row.  Considering that the recession can start in the middle of one quarter and not be enough to flip it to negative, then two solid negative quarters and then another three weeks to compile the numbers; we can be skidding into the ditch for almost nine months before the official numbers recognize that the economy is in the septic tank.

It is a bit like telling the next-of-kin that the corpse has a chest cold. 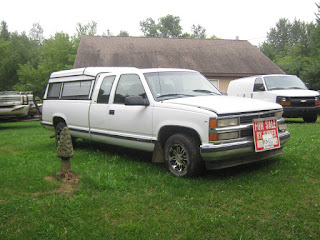 A solid real-time indicator is the number of vehicles and boy-toys for sale beside the road.  Folks sell their boats and snowmobiles and quads and mud-boggers when money gets tight.  If it is an individual tragedy then the boy-toy gets snapped up by a bargain hunter.  If it is more global in nature then the number of people pitching ballast out of the gondola of the hot-air balloon overwhelms the bargain hunters and you start getting more than one boy-toy every couple of miles. 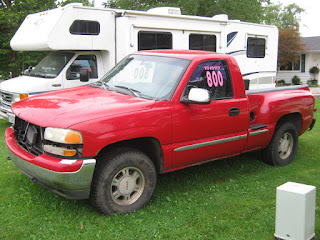 With sixteen vehicles for sale in twenty-five miles it is a safe bet that the government will declare a recession in 6 months.

Roxy's Cafe
I bought Belladonna breakfast.  She is good company.

The parking lot at Roxy's Cafe was crowded which is a great sign at a diner at 10:30 in the morning.
The menu was inspiring.

The wait staff was awesome. 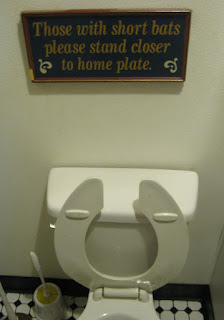 The restroom was clean.

The other diners were fun to chat with.  One couple was visiting from Dickinson, North Dakota.  The gentleman was a baker by profession and his companion (wife?) was retired.  They both thought very highly of Roxy's Cafe. 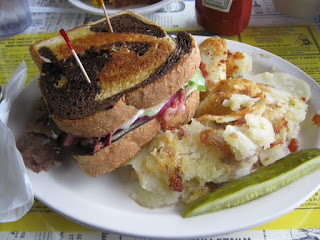 Under the gentle guidance of Theresa, my waitress, I ordered the Black Russian sandwich.

Shortly after my new friends from Dickinson, North Dakota left a gentleman sat down at their table.  Like I said, the place was busy. 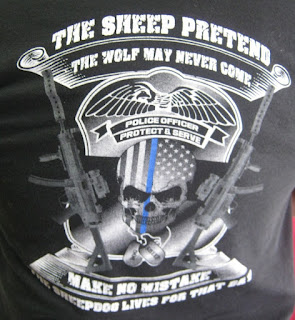 He was about fifty, maybe fifty-five.  He had situational awareness.  He also had the coolest shirt in the world.  I want one.

So, I struck up a conversation with him.  It turns out you have to know his friend Steve to get a shirt.  Steve's hobby is graphic design and silk screening.

My brother went through a phase when he was into silk screening.  I can attest that these shirts are world class with regard to technical execution.  The shading is very difficult to do with silk screening and Steve executes it flawlessly.

For obvious reasons most of these shirts are purchased by professionals in Law Enforcement.

I emailed Steve and this is his response:


Thank you Joe for the kind words. Public can buy them however we only have a few left in stock. We are working on a new version as we speak. I appreciate it.

What is cool about this is that Steve is a businessman who offers a service (playing music at weddings) to the general public.  He could have cowered in the background and declined to sell me (and you) these shirts.  Following his convictions might cost him business.

Drop him a line if you want one of these shirts or if you want to support a pro-2nd Amendment business that operates on principle...even if it might cost him a few gigs in the short term.