The corn is tasseling out and I am struck by the difference in size between "Heirloom" varieties and modern hybrids.
This is not really an heirloom variety but a combination of two, very old varieties: Santo Domingo Blue and Silver Mine. 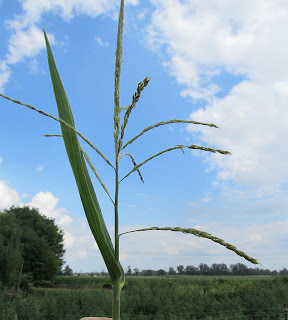 This is the tassel of a modern hybrid.  One is Dolly Parton, the other is Kate Moss. 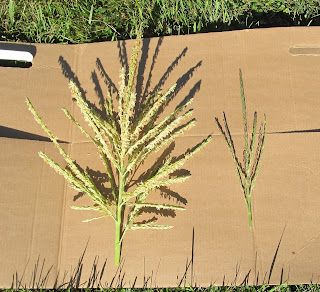 Here they are shown side-by-side.  My rough estimate is that the tassel from the older style corn is 20-to-50 times more massive than the modern tassel.

But why?
The photo shown above was taken in 1944 and shows traditional Pueblo dryland farming; melons in the foreground and maize (corn) in the background.  Estimating from the size of the person in the picture, they both appear to be planted on 8' centers in both directions.  That is approximately 700 hills to the acre.

Corn is primarily wind pollinated.  8' is a long way to throw pollen, consequently each plant must produce prodigious amounts.

A secondary factor is that traditional varieties are not so much "varieties" in the modern sense but land-races or swarms-of-similar-looking-individuals.  The inherent variability provided adaptability to large year-to-year changes in the weather.  This was survival corn, not win-a-blue-ribbon corn at the county fair corn.  The genetic variability also meant that tassels were emerging and shedding at different times, further diluting the pollen density.

Modern hybrids, on the other hand, are planted much closer together.  A farmer targeting 300 bushels per acre will likely plant more than 35,000 seeds per acre.  That is fifty times what the traditional Pueblo farmer will have in his field.  (Note:  The traditional farmer plants more than one seed per hill  but will thin to 1-to-3 plants after they emerge.)

Large tassels are not necessary because there are far more tassels, closer than the traditional dryland field.  And the modern corn tassels and sheds all at the same time.

Furthermore, the sunlight intercepted by the tassel is sunlight that is not available for photosynthesis.  I would not be surprised if corn breeders figure out how to "eject" the tassel after it has done its job so it cannot shade corn leaves.
Posted by Eaton Rapids Joe at 10:15 AM