The following is a guest essay by Owen Clarkin (email address), a naturalist from the Ottawa, Ontario area.

Hi Joe,
I believe you underestimated Rock Elms.  I will expand on this and other details below.  I am an elm-lover, but they won me over fair and square by being worthwhile and attractive trees.

Its natural history is very different than American Elm.


American Elm is primarily a bottomland tree, but is also a weedy and opportunistic generalist; it thrives on human disturbance and even with our introduction of Dutch Elm Disease it is still one of  the most common trees in eastern Ontario.  American Elm doesn't do well in deep shade (probably low end of moderate tolerance), but springs up everywhere and still grows as a scattered component in nearly every community where it is native due to its ability to germinate anywhere and outgrow most competitors.

Rock Elm is generally not a well-understood tree by science as it's not really been studied much at all, with essentially no articles in journals and only a few decent general articles in Silvics, Harlow's books, etc..  Many manuals claim that it can't be differentiated from American Elm without corky branchlets or flowers/fruit; this is of course not true, it's just that most botanists don't really know it (same applies for Slippery Elm, which looks even more different in most ways).  ~ half of the herbarium samples I've seen of "Slippery Elm" for example are mis-identified American elm, which considering how very different those two look is kind of shocking and reveals how few botanists know elms.

The main reason for few Rock Elms in the landscape today almost certainly has to do with humans.  We "drastically over cut" mature individuals of (according to Harlow) this species for timber; not so much for American Elm or Slippery Elm.  I think it is more Dutch Elm Disease resistant than American Elm (though a good number of them still die from it); but indeed it is far less weedy and the population is definitely not high except in a few areas where it is locally abundant.  There are 19th century articles, conference abstracts etc. describing Rock Elm already becoming scarce at the sawmills, decades before Dutch Elm Disease was imported.

So, Rock Elm is not a weedy tree (live hard, die young, leave a good-looking corpse) like its close relative American Elm.  It is indeed tough like you write in your article and can grow in adverse conditions of drought etc.  But, unlike American Elm and unlike the reputation of elms in general of being early successional species (which is based mostly on American Elm), it competes well in rich forests with shade-tolerant associates and as mentioned has a significant population in such forests; most of these trees are not very corky and are likely mis-id'd as American Elm.  But the buds, leaves and growth form are distinctively different to the trained eye.  Its growth form is similar to beech when young and grows wide branches into even considerable shade of other taller trees; the growth form screams shade-tolerance and is very different than American Elm when young.


Rock Elm is therefore apparently *much* more shade-tolerant than American Elm (I would put it in the "high" tolerance crowd with basswood, sugar maple, etc.); I frequently find it in dense shade of understories of Sugar Maple, Basswood, near Hemlocks, etc. It seems to be quite capable of indefinitely waiting, not mere decades but centuries.  A very large percentage of the present Rock Elm population is made up of these understory root colonies; likely a significant majority of the living individuals. 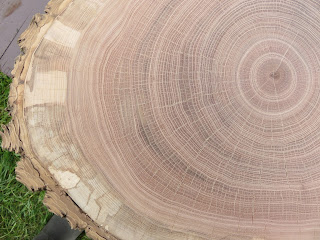 A couple years go I found a 250 year old rock Elm which was only 1 ft across; it had experienced decades of suppression throughout its life and still made it to the canopy.

Rock Elms are indeed much more rugged than most ornamentally accepted trees, but beauty is in the eye of the beholder.  To me this problem is due to the landscaping industry being a fashion industry.  They tell the public what is supposedly attractive in terms of men (He-Man) and women (Barbie)...  Rock Elms are often noticed due to their rugged charm; and there is a "Rock Elm Club" of appreciating fans in my area: people who have all independently become interested in the species through encountering attractive specimens.

The big ones in Merrickville and Hartington are spectacular trees; to me at least as beautiful as any American Elm in a rugged vs. graceful (American Elm) way.  At least 1/4 and maybe somewhere between 1/3 to 1/2 of Rock Elms don't have narrow crowns and instead grow in a similar form to some American Elms; probably most casual observers confuse these specimens with U. americana. 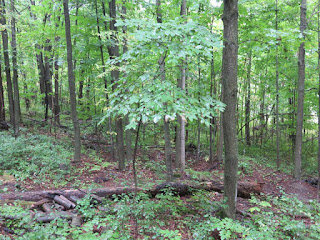 I do see Rock Elms rarely with Juniperus virginiana, another limestone loving tree, but they don't hang out closely together except on the driest rocky soils due to Rock Elm's shade tolerance and J. virginiana lack thereof.   On the driest of the limestone ridges, Rock Elm seems more at home than any other species including the famously drought-tolerant Bur Oak.

You incorrectly identified the seeds shown in the picture as Rock Elm.  The seeds of Rock Elm look very different.  Your picture is more typical of Slippery Elm, Wych Elm, or Siberian Elm. If you're using the Audubon Book as a guide, it will have the same mistake for its rock elm seed picture.

Rock elm is a protypical under-utilized tree as you noted.  Its habit for root sprouting and having both deep roots but also shallow "cables" of runners which may sprout, often appear to hold slopes and uplands better together than its associate trees.  The wood is highly desirable, its fruit are edible at a time of year when almost nothing else is in season (late May-early June in Ontario), not easily breakable in ice or windstorms, nice autumn colour, etc. etc..  And I and many others  who know them well think they're very attractive (in a Bur Oak sort of way).