One hypothesis is that larger dogs might be more susceptible to hip dysplasia.  Perhaps evolution gave them the chassis for a 40 pound coyote and then we put a 90 pound dog on top of that.  You would expect trouble with the ball joints.


So, what are the two low performers and the eighteen super-stars?

The two worst performers are the Pug and the Bulldog.  Both breeds are contorted by the kind of style that flaunts nonfunctionality. 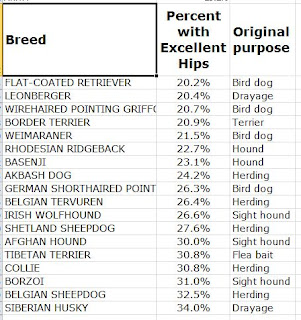 What would it take to bring German Shepherds into this elite group?


Lots of selection pressure.  The current plan, the one that was politically palatable to the dog breeders and the show industry, was to agree to not breed the very worst end of the spectrum.

Economics come into play.  The breeding industry would not exist if it not create an artificial scarcity of puppies via "responsible breeding" and the huge push to neuter.

They also work hand-in-glove with the show industry to create the perception of value-added.

One of the challenges of improving hips is that the trait does not manifest for several years.  Before the advent of artificial insemination, improving hips would mean keeping +25 studs around to ensure the likelihood of having one with excellent hips.  And the breeders would have to feed those dogs for 5+ years...the age at which a definitive determination can be made...before they could start recouping their costs with breeding fees or salable puppies.

Of course, this is all blown away with Artificial Insemination.  Every male German Shepherd could be "milked" for three sessions before being neutered.  Those straws can be stored in liquid nitrogen for decades.  At the age of five years the surviving dogs can be assessed for hip dysplasia.  The semen of any dog that died before the assessment age would be discarded as would the semen of any dog that did not have "Excellent" hips.


A quick scan of the internet suggests that one "collection" produces enough material to inseminate three dams.  Three collections wold be good for nine dams.  Given an average litter size of six, that extrapolates to 54 pups or 28 male pups.  Our 4.1% base rate for German Shepherds means one-in-twenty-five.  Our scheme generates 28 male pups....At least one of those males should be excellent considering the breeding.  The scheme should be close to self-sustaining.

The heritability of hip dysplasia is pretty low, between 0.14 and 0.25, but I have to imaging that three generations of "only excellent", 5+ year old sires would really move the needle.  And the frozen semen scheme would do it without creating any inbreeding depression choke points.  It would not take long to create three generations.  The first generation would take slightly longer than 5 years.  The first flight of dams would be whelping two years after that.  Second flight of dams would be another two years, as would the third.  I ran out of fingers but that looks like eleven years to me.

All it would take is the registering agency to start retroactively revoking the registrations of any dogs if the sire failed the "hip check" at age five.  The only way to stay in the business of selling registered dogs would be to buy into a scheme as described above.  Of course, the stakes are so high that hair samples should also be taken of the semen donor so there is a way to check if the dog whose hips are being X-Rayed are the same dog with the stored semen.