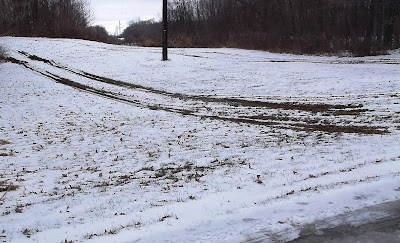 I was walking with Mrs ERJ yesterday.

As we walked up a hill, we came across one of our neighbors standing in his driveway having a conversation with an Eaton County Deputy.  The neighbor was looking at these ruts.  I could not hear what he was saying but he was gesturing with short, swift nods of his head, almost like a crow pecking at carrion.

Being incurably nosy, I hollared out, "I might know something about those ruts." and started walking up the driveway.

As I got closer I heard words like "vandalism" and "hooligans" from the neighbor.  I also learned that his insurance company would not cover the cost of repair while I trudged up his driveway.

He had been traveling for a week and came home to see his yard churned up like this.  He was mad.

I told the deputy and the neighbor about the downed power wire and my call into 9-1-1.  I told them that the 9-1-1 operator said that she was going to send the local fire department.

I told them that I thought those tire tracks belonged to whoever responded to the call.  Closer inspection revealed that the truck that made those tracks had duallys in back and had made a bee-line for the power pole that had lost the cross-piece.

The neighbor relaxed a bit at that information.  It was not vandalism.  He had not been "targeted".  It was unlikely that the "hooligans" would return for an encore performance.

He was still feeling put-upon.  The deputy informed him that getting money out of the fire department was like pulling teeth.  They simply did not have budget for those kinds of collateral damages.

The neighbor was not happy but he was much less angry.

The deputy perked right up.  He told the land owner that he was 100% sure that which ever power company had been involved, that they would bend over backwards to make it right.

The land owner and I chatted a bit while the deputy verified my 9-1-1 call and he collected details for the neighbor to follow-up with the appropriate power company.  He was happy.  He was going to be made whole.

It is rare that I have three-stories-in-one dropped in my lap like this.

Uber-Libertarians
Libertarians are fiercely independent and are loath to involve government or corporations.  Their ideology is a noble ideology and works fine as long as everybody plays by their rules.  One of the major weak points of the Libertarian process is lack of appropriate response to "vandals" and "hooligans".  My neighbor had little recourse when he assumed that the ruts had been left by a Libertarian who was unaware that my neighbor valued his lawn as much as he valued his nose.

Government
The flaw of the governmental unit was its inability to respond.  They had no flexibility for flowing financial resources to adjust to rapidly changing demands.   The hooligan would not respond.  The governmental unit, the fire department, could not respond.  If "responsibility" means "ability and willingness to respond", then neither party could be responsible in this situation.

Evil Corporation
Members of some segments of society automatically append the word "evil" to the word "corporation".  It is their attempt to simulate sophistication or rational thought.

But which entity: Governmental, Individual, Corporation, gave my neighbor a sense of order and rightness?