My mom was right

My mom was right.  And so, for that matter, is Mrs ERJ.


According to F.A. Hayek "The Fatal Conceit" of rationalism is that:
cannot be true nor can it have any effect on the individual.

Many a person was laid in the grave without fully understanding the chemistry of nitrocellulose, or for the chemistry of the mixture of saltpetre, charcoal and sulfur.  Many more met their demise due to Clostridium sps., Vibro cholerae, Salmonella typhii and Yersinia pestis in spite of the fact that bacteria had not yet been scientifically proven, nor were they fully understood, and they had unknown effects, and of course, the idea of little animalcules was completely unreasonable.

Hayek goes on to state that culture and tradition are incredibly robust mechanisms for avoiding the effects even if they do not comprehend the chain of causality.  Hayek says that we discard culture, tradition and folk wisdom at our peril.


Put on your hat or you will catch a cold


It was with much chagrin that I learned the science behind this bit of cultural wisdom.

Most types of cold and flu virus (and there are hundreds) reproduce most quickly in tissue that is between 92 degrees F and 95 degrees F (33-35 C) .  These temperatures occur most reliably in the upper nasal passages.  Some influenza strains are quite comfortable at 98 degrees F, temperatures that are reliably found in the upper respiratory tract, including the bronchial tubes.  It is not an accident that the most severe symptoms of colds and flu are in the nose.

Fever is one of our body's responses to viral infection.  Most, nearly all, influenza virus becomes dreadfully inefficient at reproducing at temperatures of 104 F.  The exceptions are some of the highly virulent, potentially pandemic strains of Influenza A.

So why does becoming chilled cause colds? 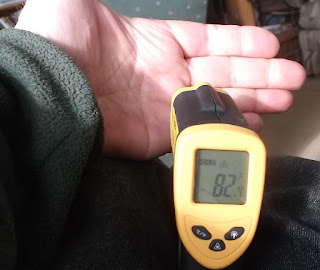 It may be because the virus has a much wider selection of tissue to incubate within.  It is no longer restricted to nasal tissues or upper respiratory tract.  Furthermore, the immune system cannot effectively flag "hotspots" with mast cells because there are many places where the virus set up shop.

I suspect that malnutrition has a similar effect.  Have you ever dieted during the winter?  You are always cold.  Your body goes into "thrifty" mode and allows the temperature of your extremities to droop.  Some of that involves choking off the flow of blood to capillaries, thus shielding virus with ill-intent from your immune system.  Guess what, those cooler, less vascular tissues became more favorable for virus reproduction.

Mom and Mrs ERJ were right.  I just did not know why.  It does not pay to scoff at wise wive's tales.
Posted by Eaton Rapids Joe at 7:27 PM