State of the Potato Patch

Mrs ERJ has been weeding most mornings for about an hour and she is slowly whipping the potato patch into shape.

I, being a compliant patient, sit in an outdoor chaise lounge chair in the shade and stay hydrated. I help by pointing out where she missed pulling some egregious species of weed.

I am pretty happy that more than half the light is first intercepted by the potato plants. As soon as the indefatigable Mrs ERJ is finished with the first pass, she will start the second pass.

I am contemplating giving the patch a late shot of nitrogen because the potatoes look a little bit yellow. Weeds, particularly annual grasses like foxtail are very aggressive at scavenging nitrogen. We left the pulled weeds in the rows but the nitrogen in the dead grasses is not immediately available to the potatoes.

As it happens, I have some buckets that held urea prills that were rained on and they are now a big clump. I will dissolve them in water and walk down the rows and drizzle the solution in the middle of the aisleway between rows.

Mrs ERJ informed me that several of the plants had Colorado Potato Beetle larvae on them so I gave her permission to spot-spray the plants. Our control plan is to spray the infested plant and one plant to either side of it.

I estimate that she sprayed 20% of the east row and a scattered handful of plants in the other rows. Since we have seven rows of potatoes, Mrs ERJ ended up spraying somewhere between 3% and 5% of the plants. 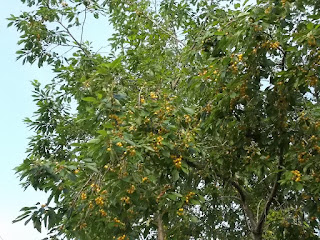 Our sweet cherries are ripe. I planted a variety that ripens yellow cherries because it was reputed to be the most cold tolerant sweet cherry and to be less bothered by birds.

It is a pity that the cherries don't taste as good as the newer varieties.

If I had to do it again, I would plant a self-fertile variety like Blackgold or Lapins or BlackYork and Hudson as a pair of pollen-compatible cherries.

One key to successfully growing sweet cherries in the mid-West is to plant the tree where the trunk will be shaded from the afternoon sun in the winter. Sweet cherries seem to be exquisitely sensitive to sun-scald. Planting them on the north side of a barn is a classic place to achieve that.

Several years ago, Belladonna was attending Grand Valley State University. I gave her a gift of two pots of flowers.

I also gave her a bottle of liquid fertilizer and the instructions to dilute it to 1/3 what the label indicated.

The pots of flowers promptly fried and Bella insisted that the fertilizer is what killed them.

There are three likely root-causes. The first cause I thought of was that her roommates maliciously poured the liquid fertilizer, undiluted, into the pots. Those are the same roommates who adopted a cat against Bella's strongest wishes. They basically gave Bella the middle finger on that.

The second most likely cause is that some drunks urinated into the pots. Hey, it is a college town. Things like that happen.

The third most likely cause is that my directive to dilute the liquid fertilizer to 1/3 of what the label specified may have been misheard or miscommunicated. Instead of 1/3 of a teaspoon per gallon of water it is possible/likely that the person applying the fertilizer diluted one-part fertilizer with two-parts water and then doused the plants.

The bottle of fertilizer was not available to check for consumption rate.

The reason for telling this story is that anecdotal evidence is likely to be missing important context. I still subscribe to the belief that pushing plants hard early in life allows them to quickly fill their allotted space and intercept the maximum amount of sun through the growing season.

Fruiting plants do well if you dial back fertilizer as they canopy-out. Diminishing fertility is one of the biological cues that tips them into fulfilling their biological imperative, that is, to produce seeds.

The most common weed in this image is Marestail. Marestail is an easy weed to pull. 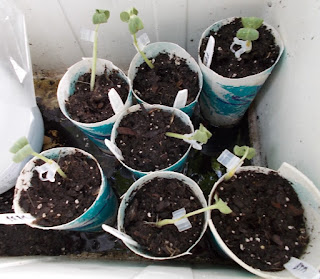 Yesterday was cloudy so I moved the cooler with the grafted watermelons outside.

Shortly after the move the humidifier went Tango Uniform.

You can see the curled leaves which indicates drought stress.

I remediated by emptying a Windex spray bottle and refilling with water. Mrs ERJ and I spray the plants every time we walk by. It hasn't been enough. 6-of-the-7 plants are hanging on, but just barely.

I am tickled that they made it a week without all of them dying. That suggests that it is doable and I need to refine methods and equipment.

Posted by Eaton Rapids Joe at 9:12 AM