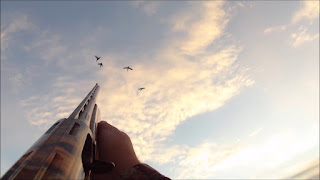 One of the tenants tenets of wing-shooting is that you have to lead the bird because it takes a finite mount of time for the shot pattern to travel from the end of the barrel to where the bird is.

Ducks can fly very quickly and pass-shooting tends to be toward the longer shotgun ranges. A duck has the potential to have flown five feet through space in the time it takes for the shot to get there. That means the shooter needs to be shooting about five feet in front of the duck if he wants to bag the duck.

It is similar to throwing a football. The quarterback must throw the football to where the receiver will be, not to where he currently is.

Growing food is the same way. You have to prepare the fields in the early spring if you expect to harvest a meaningful crop in the late summer or in the autumn.

Many people fail because they are reactive. They remain stuck in denial until their stomach is empty...and then it is too late.

An interesting interaction happens starting at the 3:44 mark. The two young men riding in the gator are bragging up their "cred" and the older man who is the driver imparts some wisdom.

This video is a seven minute video documenting efforts in Jackson*, Michigan as they start a HUGE community garden.

I applaud the people in Jackson, Michigan who assimilated the news about global food insecurity and who are demonstrating personal responsibility and acting on that news.

I might have some minor quibbles** about the details of how they executed but they are making a huge effort.

It is far easier to ride a bicycle once it has forward motion than when it is stationary. Once moving, the adjustments are minor and incremental. Gardening is a similar learn-by-doing venture.

*Jackson, Michigan is a typical rust-belt city that has been hemorrhaging jobs for the last four decades. At one time it was home to the world's largest walled-prison.

**I about cried when I saw the rock-hard, indoor-stored, large round-bales being used for mulch. But I have to admit, they sure spread more easily than soft, decayed "waste" bales. And if those bales get a half-dozen families gardening then it was a great investment.

Posted by Eaton Rapids Joe at 7:49 AM