The warble of a siren went off near the end of the segment of line that contained the Random Parts operation.

Snodgrass turned to another operator in the station and asked “What is that?”

“Conveyor problem” the operator said with a smile. “We are going to get some ass-time.”

Snodgrass watched “white shirts” and skilled trademen converging on the end of the line.

Four minutes later, the line rumbled to a halt.

Snodgrass’s coworker volunteered “The buffer is full. Don’t have no place to put jobs” as he walked over to the plastic table and sat down.

Within seconds the supervisor was running up and down the line telling the workers to start sweeping. “You are still on the clock. Pull out the roller-bins and start sweeping”

The Team Leader said “Calm down. It will start back up in a minute and then we will lose time putting the brooms away and pushing the equipment back into place.”

The supervisor didn’t dispute the point but went down to the next team and repeated his directive.

The table did not have enough room for the team and Snodgrass. The engineers who had designed the workspace had been fanatical about avoiding “just-in-case” sizing.

In fact, at one point the plant layout had to be redesigned when somebody pointed out that the largest sky-hook lift equipment would not roll down the aisles. Through-roof-extraction of the largest equipment would require a large crane and those have multi-month lead-times for scheduling.

So rather than commit to removing and replacing critical mega-equipment by cutting it apart with torches, the engineers relented and added a meter to the width of the aisleways.

That same level of generosity had not extended to the cheap, injection molded “picnic” table that was supplied to the team.

Snodgrass grabbed a broom and a dustpan, earning him the snickers of the other team members.

Some of the items beside the line were sweepable but the most vexing form of litter were dozens of loose, 8-1/2 by 11” sheets of paper. One side of each sheet was completely covered with vivid, colored ink.

Snodgrass hadn’t run into these before because he stay on the line-side of the roller racks. These sheets were primarily on the aisle side of the racks and beneath them.

“What are these?” Snodgrass asked. Paula wanted him to learn how the plant worked and this was something he didn’t have a clue about.

Looking for traffic in the aisle-way, Snodgrass stepped to the middle of the aisle and then oriented the sheet so the numbers were right-side-up. It was apparent that the sheets were prnt-scrns of an Excel spreadsheet and the cells had been laboriously sized and situated to resembled the aisle-side of the pick-face.

Left-became-right from what he was familiar with. 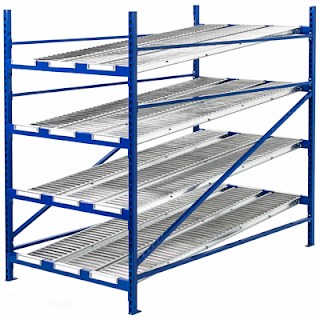 One of the things that had bothered Snodgrass was how low he had to bend over to pick some of the heavier parts. Looking at the pick-face from the material-supply side, he saw that the loading height was at belt level. Then, add the fact that the operators were standing on an 8” platform and the roller-racks were inclined so gravity moved the totes to the line as they were used up…and the heavier parts were below the “ergonomic box” for optimal picking.

Meanwhile, the racks were set up so the production workers loaded the emptied totes from above the ideal ergonomic height.

Furthermore, looking at the gas-struts (for instance) he saw they were arranged on the sheet of paper left-to-right based on the last three numbers in their part-number. That is why they appeared random from the operator side. It had nothing to do with the model they were installed on. It was to simplify things for the material delivery drivers.

Comparing a couple of the sheets he saw the cells had different color patterns and numbers printed on them.

“Whats with this?” Snodgrass asked, holding up the sheets with the colored faces toward his teammates.

“Stringbean” the Team Leader said. Obviously, they were enjoying the entertainment value of stringing this out as long as possible.

Snodgrass didn’t find it very funny but he played along.

“What about him?” Snodgrass asked.

Stringbean was one of the material delivery drivers. He was a slow talking man who never stopped talking. If nobody would slow down and listen to him he was perfectly happy to keep talking to himself.

“Then he can’t be a material delivery driver” Snodgrass said. It only stood to reason.

“Well, he is. He has the seniority. He applied and held the job for more than a month so Malichi cannot get rid of him unless he starts writing him up for not being able to do his job. It is in the contract.”

“Those pieces of paper you are holding is how Stringbean gets the right parts into the right rack. That, and a lot of guessing” the T/L said.

Looking at the lower, right corner of the sheet Snodgrass saw that its author was M. Ascaris. Malichi!!! Malichi had hundreds of hours invested in painstakingly creating the Excel spreadsheets that provided a visual reference for the material delivery drivers.

No wonder Malichi was so incredibly resistant to any changes to the pick-face. He would have to redo his graphics.

The siren at the end of the line started warbling in short bursts. The team stood up from the table and trudged back to their job positions.

Snodgrass took that to mean the line was going to start back up. He stuffed the sheets he was holding in his hand into a nearby trash container. No point in holding on to them. Once he was looking for them, he saw them everywhere.

He too, walked back to the line just in time for the job transfer jerk to life.