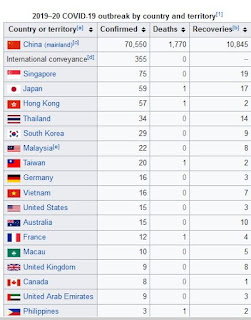 As expected from the virus' origin in China, distribution is roughly related to proximity to China, economic ties to China and percent of population that is ethnic Chinese.

Comparing the two lists, the one country that stands out as having many citizens of Chinese ethnicity and is in close proximity to China but has yet to report any Covid-19 cases is Indonesia.

Why is that an issue?
There are two scenarios.

One has authorities on the existing cases like hobos on ham sandwiches. They are all over it. And they are not reporting for political reasons. That is the more desirable of the two scenarios.

The other scenario, the less savory one, is that the authorities are oblivious to the eight or more people infected with Covid-19, wandering around Jakarta infecting hundreds or thousands of other people.

Why did I pick eight out of my rectal region? Because there are 22 reported cases in Malaysia and Malaysia is equidistant from China and has three times the number of ethnic Chinese. At this point, one would expect the number of cases in Indonesia to be approximately 1/3 the number in Malaysia. Reported numbers lags actual cases, particularly when an epidemic is in the growth stages.

Another anomaly is Venezuela. They have many ethnic Chinese even though they are far from mainland China. Given the state of that country, consider what a goat festival that would create. The resulting diaspora of potentially infected Venezuelans could bring Central and South America to its knees.

The fickle finger of fate in epidemiology
Those streaks of apathy, or poor or ignorant or oppositional populations are what make epidemics "interesting". They are the Wedgie Stewarts of the Seven Cows story.

The one patient who deliberately infects as many others as possible.

The people who have substance abuse issues or work in "the sex industry" or are marginalized (sometimes by their own choice)...they are the joker in the deck.

Why do I characterize them as streaks rather than pockets of apathy? Because pockets are contained while streaks can reach out and touch any one of us.
Posted by Eaton Rapids Joe at 11:46 PM