The devil is in the details (fiction)

Miguel spat on the palms of his hands. He was going to have some world-class blisters before this was done.

The old-timers had recommended gloves but Miguel thought he was tough enough to not need them, especially after Donnie refused them.

The old geezers chuckled dryly. Been there. Done that.

Three hours later, Miguel wished he had taken advantage of the hint.

Tomanica decided to have a horse-race. First, they would blow a bridge using techniques he was comfortable with. While they were doing that he would explain the basics of demolition to the newbies.

Tomanica knew in his heart that explosives would be the clear winner. If the other methods had been as fast or as good, The USMC would have trained him in those methods. But those methods were just footnotes in the manuals.

After careful study of Miguel’s sketches, Tomanica and Gimp came to the conclusion that the bridge abutments were the structural element most vulnerable to Capiche’s limited repertoire of explosives.

After making several back-of-envelop calculations, Gimp and Tomanica announced that two cylinders of ANFO that were 100mm in diameter and 600mm in length would be sufficient to compromise the abutments of the bridges Miguel and Wilder had so carefully documented provided those charges were optimally placed. It should come as no surprise that 100mm-by-600mm is approximately the dimensions of two, 2 liter pop bottles positioned base-to-base.

The devil is in the details.

Gimp and Tomanica looked through all of Miguel’s drawings and came up with one, universal placement that was “optimal” for all of the bridges. It involved driving two, 10 feet deep post holes at the edge of the pavement and angling inward-and-downward  at 45 degrees. The holes were to be started five feet back from the vertical plane of the abutment.


That would put the two charges ten feet apart, six feet beneath the pavement and five feet from the face of the bridge abutment. 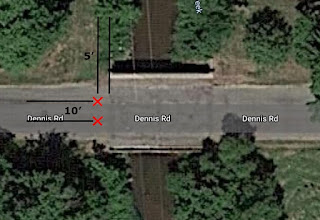 But, by dint of Iwan augers, clam-shells, spud bars, mauls, threaded on extensions and testosterone-driven-stubbornness, Miguel, Donnie and the other young muscles were able to drive two holes in the required location and of tthe required dimensions in six hours of clock time.

The actual demolition was anti-climatic. The charges had been lashed to poles to facilitate insertion. There was ample loose fill to tamp the holes.

One characteristic of back-of-envelop calculations is that they tend error on the side of being overly generous. The next time the crew blew a bridge they vowed to be at least twice as far away when they touched the wires to the battery posts.

Wade Hawk was on top of the barn trying to raise a signal with home-base.

The plan was to have Wade call in fifteen minutes before sunset if something came up. Home-base had given him a frequency and said they were going to be listening.

As good as their word, home-base responded on his second ringy-dingy.

“Whats up?” home-base asked. They had agreed that too much military lingo would raise suspicions.

“You sound just like my teenager” Tim grumbled. “What are you spending it on?”

“Why is it costing so much?” Tim asked. “I ain’t arguing. I just want to have answers in case ‘dad’ wants to know.”

“It costs extra because it is being custom cut to fit the stove” Wade replied.

“How much money?” Tim asked.

“Same as you sent me with.” Wade said.

Then they signed off.

In fact, the plan to plug the drain tiles was WAY ahead of schedule.

Moe Tyler’s kids and nephews showed up with a hay wagon pulled by horses. The rounds of firewood had been sorted into the diameters they expected to encounter. One of the young men ran up one side of the river with a measuring tape and measured the end of the drain-tile. Then he shouted the diameter back to the men at the wagon.

One of the other men picked up a round of the appropriate size, a wedge and a mallet and carried it to the drain-tile and installed it.

After the measuring man reached the limit of how far he could shout, another man followed and slapped a goodly trowelful of mortar on the inside of the tile to ensure the plug didn’t come loose anytime soon. The mortar man quickly figured out that mortar slapped on the bottom of the tile got washed away if the tile was flowing any water at all. He slapped the mortar into the seven-to-nine o’clock positions.

The crew could “impair” all of the drain tiles within two-hundred yards of the road in less than two hours and then moved on to the next road. The plan was to get what was easy, quick. Then come back and be more thorough if there was time.

Part of what made Wade’s proposal palatable to Tyler was that Wade was paying them to compromise the tiles east of the Red Cedar and west of Doan Creek. Tyler farm the land between those two water courses so none of his land was impacted.

Wade hadn’t bothered to tell Moe Tyler and his clan that in a few weeks Capiche fighters would blow the bridges and turn Moe Tyler’s neighborhood into an island.