When we arrived in Dundee, the vehicle we were interested in was in the shop for an electrical glitch. The owner of the business said it would be ready for a test drive in about a half-hour, if I cared to wait.

Heck, we had already spent two hours in our vehicle driving to Dundee. Mrs ERJ said she would relish the opportunity to stretch her legs.

So we set about exploring downtown Dundee.

We didn't get far. 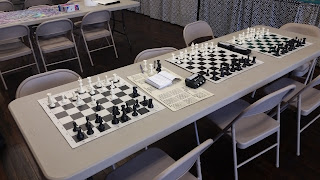 There is a "game" store in Dundee that is called The Accelerated Dragon. Pushing the door open revealed a large, brightly lit, open room populated by uncluttered tables. The first table had several chess games on it.


The gentleman was sitting toward the back of the room welcomed us as entered. Matthew is the owner of The Accelerated Dragon.

He is also an unabashed science junkie.

He sees the role of The Accelerated Dragon as being similar to the coffee houses of the 17th and 18th centuries. That is, to provide a venue where people can find other, like-minded folks and establish a sense of community in a face-to-face environment.

Mrs ERJ asked him "What kinds of games do you have?"

Matthew replied "I have a little bit of everything...everything but Magic games."

Matthew said "Because the 'battles' become an arms-race and they escalate to where it is not skill-based. Folks become obsessed and can buy 'heroes' so the winner is not the most skilled but the one with the deepest pockets."

"That is not what I want this space to be about" he concluded. 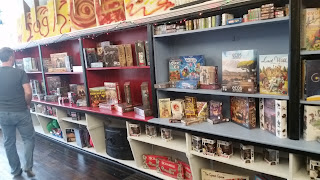 The shelves are color-coded. Some games are multi-day affairs which appeal to a certain client. Other games typically last for a few hours. 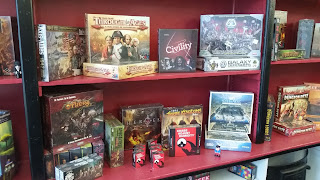 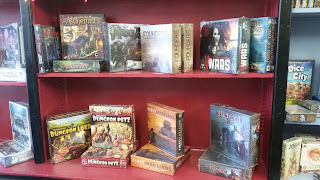 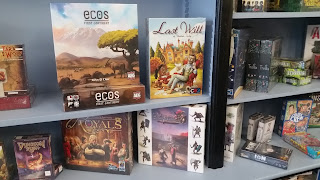