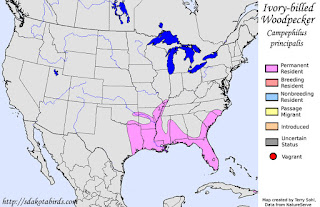 The Ivory-billed Woodpecker was an iconic bird of the American deep-south. 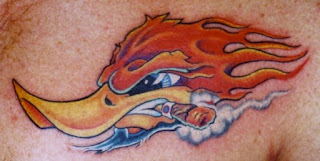 So much so that some young men choose to identify themselves as 'peckerwoods and tattoo woodpeckers on their forearms.

Ivory-billed Woodpeckers disappeared from the continental United States in the 1930s with an occasional sighting being reported at very rare intervals.

It is believed by some that a small population of Ivory-billed Woodpeckers still exists on Cuba.

That hypothesis remained largely unchallenged until 2007 when Noel Snyder published a "Hey, wait a minute" rebuttal.

According to GEOFFREY E. HILL of Auburn University

I have regularly given presentations to general audiences on ivorybills in Alabama and the Florida panhandle. Following several of these talks, elderly members of the audience have recounted tales about shooting ivorybills. These accounts generally involve old men whom the storytellers knew in their youth, so the tales typically go back about 80 to 100 years to the early 20th century. I have been told that in southern Georgia and the Florida Panhandle, everyone used to know that if you wanted something for the stew pot, you went to the swamp, banged twice on a bucket or a log, and shot the woodpecker when it came in. I was also told that ivorybill flesh was the favored mink bait used by trappers on the Pascagoula River in Mississippi.

What is striking about this quote is "...everyone used to know..." does not sound like a mythically rare beast. Also, trappers would not choose an incredibly rare, difficult find beast to use as "favored mink bait". They would choose something common and easy to find.

And therein lies the fate of the Ivory-billed Woodpecker. It was extremely territorial and would challenge any interlopers. Even if the interloper was actually somebody smacking a bucket or a log with a big stick.

The take-away of this paper, is that we might be MORE likely to find Ivory-billed Woodpeckers at Fort Rucker, Camp Shelby, Fort Polk or the Red River Army Depot or some of the big timber holdings in east Texas than in the places where the birds were last seen.

The thing about a bird like the Ivory-billed Woodpecker; if you were a property manager, would you report seeing one?

Hat-tip to Lucas Machias for the story!